The management of investment holding company Brait seemed to walk on water from 2011, when the company was restructured into a holdco, to the end of 2015. During this time, the share price rose tenfold from R16.50 to a high of R174. Things started to unravel in 2016 – with the share price falling by more than 50% over the past year. We believe the valuation is now more reasonable, however, and the share offers the opportunity for further geographic diversification of South African investors’ portfolios.

Brait’s initial success resulted from its profitable investment in Pepkor, which the investment company sold to Steinhoff in 2015 for seven times its 2011 cost price. Brait was sitting on a large cash pile as well as 200 million Steinhoff shares following the Pepkor sale.

Things got even better for Brait in 2015 when Steinhoff rallied and Brait sold these shares for an almost 40% gain within the same year. Brait then applied its cash resources towards two major UK-based acquisitions, NewLook and Virgin Active, just in time to see the rand plummet against the pound and other major currencies, which further increased the net asset value of Brait in rand terms.

Until 2015, the net asset values reported by Brait’s management were based on valuation multiples on its assets similar to the prices at which they were acquired. The valuation was then increased in line with the growth in the underlying cash operating profits. This often understated the potential realisable market values of the assets, which is why the market was willing to pay a premium for Brait relative to its reported net asset value.

However, during 2015, Brait decided to revalue the investment company’s assets to what management deemed to be valuations that were more market-related. This, together with the currency impact, inflated the directors’ net asset value per share for Brait from R80 in June 2015 to R136 by March 2017. In particular, there was a large valuation increase for NewLook from R15 billion to R35 billion over this period, as management used a very highly rated peer group – which included Zara, H&M, Mr Price and Uniqlo – to compare NewLook’s valuation despite the much lower valuation for which they acquired the business on a ‘willing-buyer willing-seller’ basis.

Despite this less conservative valuation, the market was prepared to pay an even higher premium on net asset value for Brait, resulting in the share price rising above R160 during this time. When the rand started to recover in 2016, however, things unravelled quickly, exacerbated by Brexit putting pressure on the UK economy and currency. Brait’s UK businesses, NewLook and Iceland Foods, performed poorly. Management was forced to downwardly revise their valuations of their assets, resulting in a reduction in the net asset value per share for Brait from R136 in March 2016 to R82 by year end. The share price followed, falling by more than 50% over the past year.

So where to from here for Brait? In our view, investors should be careful not to anchor their perceived value of Brait on its previous high levels, since it was clearly mispriced by the market in 2015. Also, we shouldn’t blindly rely on management’s (subjective) net asset valuation to determine fair value.

Using our own fair value estimates for the underlying assets, we calculate a fair intrinsic value of R96 per share for Brait. We’ve provided for some improvement in NewLook’s operations, while a third of our valuation for Virgin Active is based on new clubs that still need to be rolled out. There are, however, early signs of improved performances from both Iceland and NewLook towards the end of a tough 2016.

Although most of Brait’s assets are based in the UK, our valuation for the investment company isn’t as sensitive to changes in the rand/pound exchange rate as one would assume. This is due to a large portion of Virgin Active’s profit deriving from South Africa, as well as the relatively high pound-denominated debt in Brait and within its underlying investments.

Nevertheless, in our view, Brait will still add geographic diversification to South African investors’ portfolios. The valuation is reasonable at current levels, providing a decent entry point into a holding company with strong management track record. 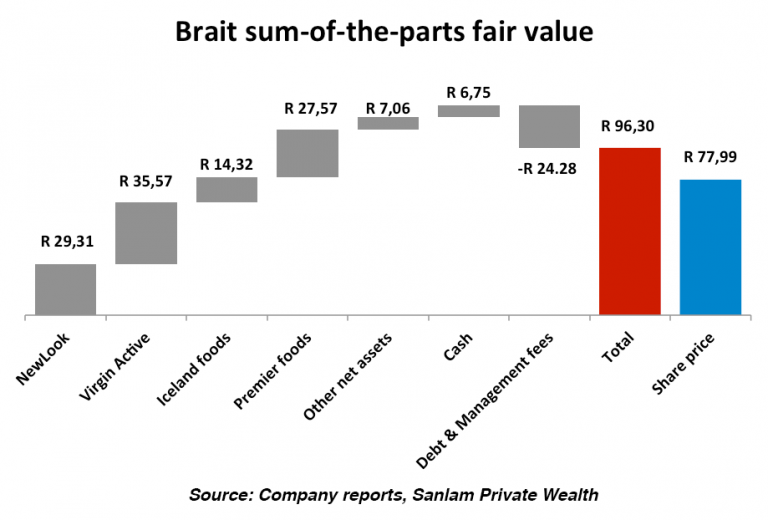