In February this year, we stated that we weren’t keen on owning South African telecom companies such as MTN in our client portfolios, given the unfavourable risk-reward balance of these shares at the time. Since then, however, the impact of the globally escalating COVID-19 pandemic has altered the economic landscape considerably, and a sharply declining MTN share price has, in our view, created an opportunity for investors.

When we wrote about telecoms in February, MTN was trading at around R85 a share and despite expectations for decent earnings growth, we were concerned about both frontier-market currencies and risks around regulatory interventions. We said we’d only buy shares in local telecom companies when they were particularly cheap.

Amid the global equity sell-off that started in March, MTN was hit much harder than its peer, Vodacom – mainly because of the former’s exposure to oil-exporting countries, particularly Nigeria, which accounts for nearly a third of the group’s operating profit. At a time when global asset managers were running for the cover of hard-currency bonds, MTN’s frontier-market exposure was badly out of favour. As the share price declined, a major shareholder became a forced seller due to certain derivative structures, driving the price down further.

While all this was impacting the share price, lockdowns in many markets were driving a sharp increase in data traffic on MTN’s networks. As offices moved to homes and business meetings went online, retail sales plummeted, but airtime sales increased. As an essential service, telecoms continued to operate, highlighting the utility-type nature of the industry’s sales. With economic difficulties anticipated in many countries, we expect telecoms revenue to be much less sensitive on the downside than in most other industries, but also not as sensitive to future recovery.

In March, the emerging risks to MTN’s business were not related to local-currency revenue declines, but rather to the low oil price (Brent oil was below US$30/barrel for much of March and April), which impacted currency expectations and consequently the future translation of profit from certain geographies into rands. Given that oil constitutes more than 90% of Nigeria’s exports and that over three quarters of its government revenue comes from that commodity, the concerns were justified but, in our view, overstated.

Looking at the longer-term impact of the COVID-19 pandemic on consumer behaviour, it’s clear that the global response to the disease has accelerated the adoption of digital technologies, which should benefit African mobile telecoms operators. At the same time, health concerns have resulted in increased use of mobile money instead of cash. While this part of MTN’s business is still relatively small, it presents an attractive growth opportunity across multiple geographies.

The previously highlighted risk of telecoms being a target for cash-strapped frontier-market governments remains, as does that of the industry’s lack of long-term inflation pass-through. The difference now, in our view, is that investors are being more than adequately compensated for such risks.

Despite the slump in gross domestic product for 2020 predicted by most economists, and an anticipated 40% decline in the Nigerian naira / rand exchange rate by the end of the year, we still expect MTN to generate roughly R6 per share of clean earnings in 2020 and 2021, rising to over R8 a share in 2022.

At Sanlam Private Wealth, valuation remains the foundation of our investment philosophy. As we look through the current economic challenges, our modelling suggests that MTN’s free cash flow will exceed its accounting earnings. According to our numbers, the group should generate over R26 per share of free cash flow over the next three years, which is almost half the current market capitalisation. Even if we assume a scenario in which MTN is unable to repatriate cash from Nigeria, the group should generate around R17 a share of distributable cash over the next three years.

As shown in the chart below, at the current price, investors are essentially getting MTN’s Nigerian and Iranian operations, as well as the group’s various tower company and e-commerce assets, for free. 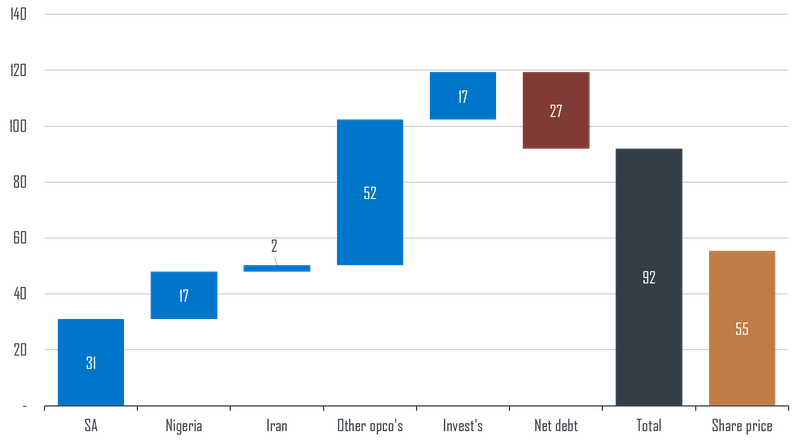 We added MTN to some of our client portfolios during April. As the group demonstrates its resilience in the face of the COVID-19 crisis over the next 18 months, we expect the market to reward investors who were willing to take a contrarian stance.