In the face of high levels of political and economic risk associated with South Africa, the relative resilience of our fragile rand has continued to surprise investors – until around a month ago when it started reacting negatively to increased global risk as well as a few ‘own goals’ at home that frightened markets. The severe rand wobbles shouldn’t influence long-term investment decisions, however. While we of course understand the short-term volatility, we’re not rand doomsdayers. We don’t believe the local unit is going to blow out over the longer term – provided the South African Reserve Bank (SARB) stays true to its current mandate.

Given that the rand is usually considered a risk barometer within South Africa, one would expect the currency to have depreciated against other units since the start of the year in the face of general elections, fiscal deterioration, debt-laden state-owned enterprises and land reform debates. Until around mid-July, however, it traded broadly sideways against the US dollar, the euro and the pound.

In our view, the main reason the rand generally behaved despite a highly volatile and uncertain political local landscape relates to investor expectations of global central banks’ interest rate decisions. After raising rates four times in 2018, the US Federal Reserve (the Fed) did an about-turn on its monetary policy stance in December, putting rate hikes on hold. The Fed’s more accommodative policy made the greenback a less attractive investment destination for income-seekers and, in the global hunt for yield, emerging markets came back into favour. International capital flows to emerging markets increased, with South Africa’s bond market a leading beneficiary of the trend.

So why did the rand start bleeding around mid-July? From a global perspective, investors tend to employ a risk-off strategy and rush to safe-haven assets when faced with a buildup of global economic risk. Indications that the global economic and investment cycle is losing momentum are now indisputable, and the US-China trade tensions appear to be worsening.

Since emerging markets are generally regarded as higher risk investments, their currencies as a whole have come under significant pressure. As part of this rather unpopular investment basket, South Africa has come under even further scrutiny in terms of credit risk, political stability and economic growth. The rand has finally started to bear the brunt of the change in investor sentiment.

We’ve also scored a few ‘own goals’ that have caused our vulnerable currency to slump by around 9% against the US dollar, and 10% against the euro over the past few weeks:

The impact that all the local tumult has had on our currency is clearly depicted on the graph below, which shows the five-year US dollar credit default swap (CDS) spread of both South Africa and Brazil. CDS refers to the ‘premium’ that investors in government bonds pay to insure against the risk of the government in question defaulting.

Global investors tend to lump emerging markets into a single basket of currencies – until risk events in one country result in its currency being isolated from the rest. As can be seen on the graph, there hasn’t been much difference between the CDS spreads (which are closely aligned with currency movements) of Brazil and South Africa over the past 10 years. Around mid-July this year, however, South Africa’s risk ‘premium’ started to increase. The world is clearly now viewing South Africa in a different light to our emerging market peers. 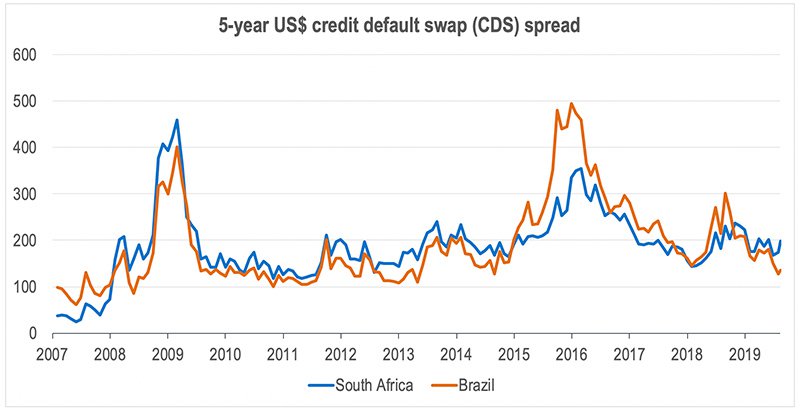 HOW TO VALUE THE RAND

So what are investors to make of all this? Should we recalibrate our portfolios to take into account the wobbles of the rand over the past few weeks? And what are the future prospects of our currency?

In our view, an important factor that investors need to consider is whether or not the rand is trading at or close to what’s regarded as its fair value. How do we measure this? In an ideal world, the currency should track purchasing power parity (PPP). This method of calculating the value of a currency should track the inflation differential of the home currency versus that of its most important trading partners. The currency could deviate wildly around the theoretical line for extended periods, especially in a cyclical economy such as South Africa where political uncertainty has such a marked impact over the shorter term.

The rand is currently trading at one standard deviation away from its theoretical value (our adjusted PPP value) against the US dollar. Against the euro and the pound, it’s actually trading more or less in line with PPP. This means our currency is – theoretically – trading at the correct valuation.

The question is whether PPP remains the best tool for understanding the value of the rand. In our view, the answer is yes. Investors shouldn’t become spooked by the short-term movements of the currency, which is likely to remain volatile. If the local macro environment deteriorates, the rand may come under further pressure, but tried-and-tested financial laws will continue to apply over the long term, as they always have. If our inflation rate remains marginally higher than that of our major trading partners, the rand should continue to depreciate slowly in absolute terms. However, relative to PPP, the currency has always reverted to the mean over the long term.

Of course, the doomsdayers will argue that given all the political uncertainty, it’s only a matter of time before inflation spirals out of control in South Africa. We’re not in this camp. Our base case view is that the SARB is likely to remain true to its mandate, and will remain vigilant in its efforts to protect the value of our currency by keeping inflation in check through strict monetary policy.

With regard to global investor sentiment, if our above assumption turns out to be correct, South Africa should over time track the emerging market currency basket – the market doesn’t usually take too long to forgive and forget geopolitical risk factors and start pricing in investor fears.

The bottom line is that the current currency volatility shouldn’t be the driver of long-term investment decisions. As professionals, we know that in times like these, the most prudent response is to ‘stay the distance’ with our investment approach, which has proven its worth through turbulent times, investment cycles and currency fluctuations.