Despite banking share valuations hitting 20-year lows in the aftermath of the Covid-19 crisis, South African banks have proven to be remarkably resilient businesses. We’ve seen a notable earnings recovery in the sector over the past 12 months, and we expect continued good results for the remainder of 2022. While we still favour the sector, we have, however, been reducing the exposure to banking shares in our clients’ portfolios – in line with our valuation-based approach.

While occasionally disrupted by macro-economic events such as the global financial crisis in 2008 and the Covid-19 pandemic in 2020, South African banks have over time proven to be robust businesses, with stable – and growing – earnings profiles, as can be seen on the chart below. However, while earnings have recovered to pre-pandemic levels, we are yet to see these businesses return to their trendline earnings growth of 11.5% per annum exhibited since 1995. 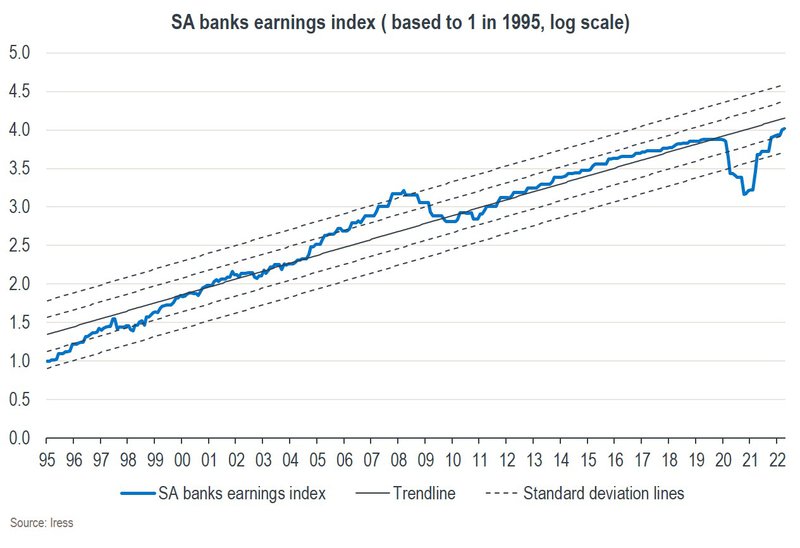 In the most recent crisis, the fallout from the pandemic certainly impacted earnings in the sector, mainly through bad debts and high provisioning. Since the historic lows of March 2020, however, banking shares have posted a stellar recovery, outperforming the JSE All Share Index (ALSI) by 42% over the period.

What has made the banking sector so resilient when other industries have floundered in a materially deteriorating macro-economic environment? One alluring aspect of the sector is its captive market – banks are intricately linked to the functioning of an economy. As markets formalise and grow, both individuals and businesses require bank accounts to participate and benefit. Another area of growth is the funding of renewable infrastructure, a new source of revenue for South African banks.

Although South Africa has high banking penetration, financial inclusion is low. A sizeable informal sector currently driven by cash transactions and a large cohort of unbanked individuals provide both a runway for the future growth of existing banks and the proving ground for challengers in the sector.

In recent years, we’ve seen several low-cost digital banks (with no bricks-and-mortar branch network), powered by newer financial technologies, enter the market with the aim of disrupting the industry. The challenger banks’ competitive advantage is that they can automate the transactional side of banking and offer lower fees, putting pressure on traditional banks’ non-interest revenue. This has increased competition as more previously excluded people are drawn into the financial system, increasing the size of the pie for everyone.

We’ve also seen an increase in the use of mobile money. This is a pay-as-you-go digital service using mobile money accounts offered to clients by a mobile network operator (such as MTN’s MoMo or Vodacom’s M-Pesa) or another entity partnering with an operator, which are independent of the traditional banking network. Mobile money services have also increased access to the financial system for previously unbanked individuals.

While these offerings have grown client numbers, the large traditional banks still account for more than 95% of loans and deposits within the banking system. The big players continue to own the profit pool and have the resources to defend their position.

Although banks provide many services to their customers in the modern economy, they primarily make money by accepting deposits from savers and lending to borrowers. Earnings are driven by three elements:

South African banks are currently in a profitability sweet spot, as they are benefiting from rising rates but are not yet experiencing the pain of increased bad debts. There’s a direct link between a change in interest rates and the profitability of banks, known as the endowment effect: when interest rates are rising, banks make more money seen through the net interest income line on the income statement.

The endowment effect is heightened by several factors, one of which is what are called ‘lazy’ deposits – when customers leave their cash in a savings or cheque account that earns a low interest rate (for example, Standard Bank at 3.85%), and the bank then lends it to another customer at the prime rate (currently 9.75%), earning the difference. The interest rates earned on these lazy deposits typically do not adjust as quickly as or equally to the prime lending rate.

These deposits have grown by more than 30% since December 2019, accounting for around 60% of total deposits in the banking system, according to South African Reserve Bank data. The prime lending rate has increased from 7% to 9.75% since October 2021 and is set to rise further in the coming months.

In terms of sensitivity to rate changes, not all banks are affected equally. The chart below illustrates our view of the effect of interest rate changes on the ‘big four’ South African banks. According to our research, holding other things constant, a 1% rise in interest rates over a 12-month period will see Standard Bank’s net interest income rise by more than 6%, making it the most sensitive to the rate hiking cycle. 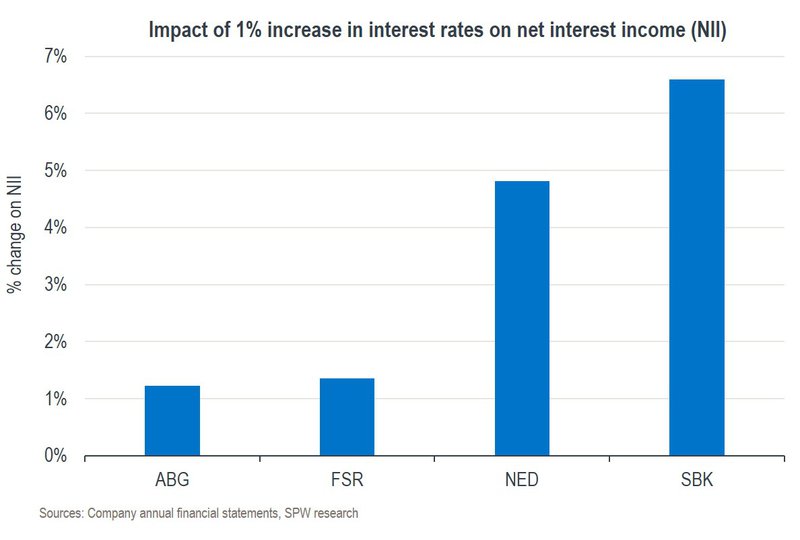 While South African banks have recovered markedly since their post-Covid-19 lows, and there may still be opportunities in these shares, at Sanlam Private Wealth we’re of the view that, going forward, we may not continue to see the same level of outperformance demonstrated recently.

As a result of the integration of banks within an economy, the macro environment plays an important role in the expectation of returns in the sector. The global energy crisis, rising rates, consumer fragility and South Africa’s impending greylisting by the Financial Action Task Force will start to weigh on the sector as investors consider the repercussions for local growth.

Even though our banks are exhibiting resilient earnings and are well capitalised, they are particularly exposed to tail risks given their gearing and reliance on general consumer and business confidence. The high levels of volatility of banking share prices during economic and political uncertainty do, however, create opportunities for investors.

The chart below displays the relative performance of the South African banks index versus the ALSI. It illustrates the outperformance of the banking index over the past two years but, more interestingly, also the many opportunities investors have had to trade banks relative to the ALSI, particularly around times of economic distress. 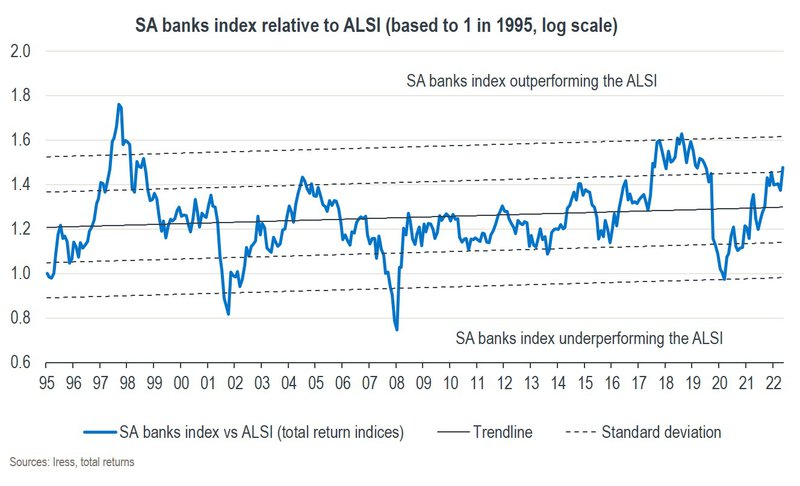 In the aftermath of the Covid-19 crisis, we made use of the opportunity to selectively add banking shares to our clients’ portfolios. In general, we expect continued good earnings results for the remainder of this year. However, while we still favour the sector, we have been reducing exposure to it in the portfolios, in line with our valuation-based investment approach. Our focus has shifted to the risks as we wait to take advantage of expected cheaper entry points in this sector in future to enhance returns in our clients’ portfolios. 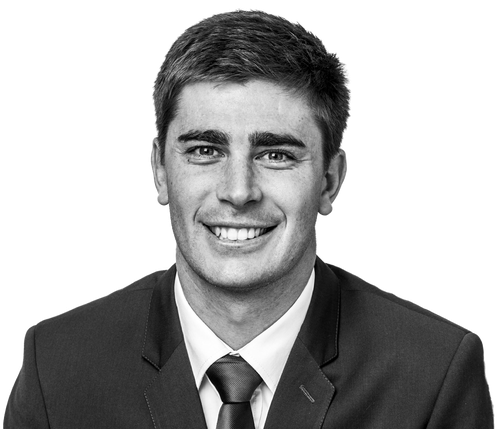