Tap into the network
of the Golden Keys

In our hyper-connected world of smartphone apps, instant online bookings and iPad guidebooks, the concept of a hotel concierge may appear a bit dated. And yet for those in the know, their value is priceless.

Step inside just about any luxury hotel worth its room rate, and you’ll find the concierge desk occupying pride of place in the lobby. A service that should, you’d think, be consigned to the annals of hotelier history, remains one of the first desks discerning travellers encounter after a long-haul flight. What’s going on?

‘It’s not enough any more to just have lavish rooms and a plush lobby,’ says Adam Isrow, founder and Executive Vice-president of hospitality industry software company GoConcierge. ‘The concierge creates “magical moments” for guests during their stay, and the extra service excellence is what resonates with them when they leave.’ 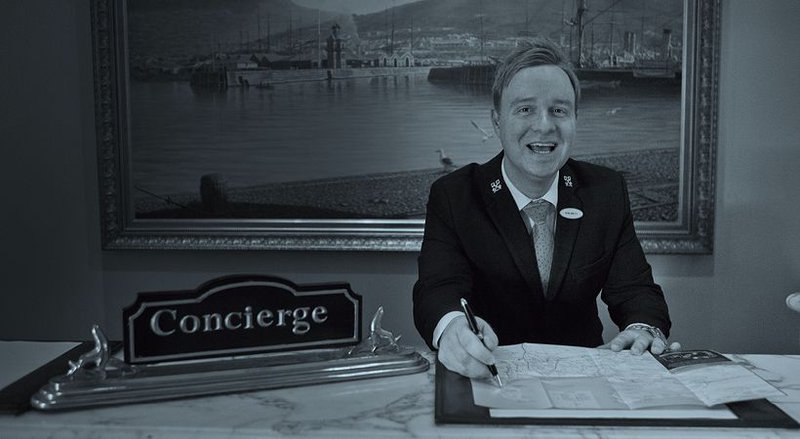 Increasingly, the true value of modern-day concierges lies in their ability to quietly open the right doors for high-end travellers.

‘The dynamic of travel has certainly changed with technology, but no website or platform knows where the true hidden gems are – the best seats in the restaurant or obtaining tickets to sold-out events,’ says Masood Sadulla, Chief Concierge at the sumptuous Saxon Hotel in Johannesburg.

While guests are more informed than ever, the desire for local knowledge – and inside information – has become more important than ever. Access, not excess, is the new luxury.

But equally important is the element of old-fashioned hospitality, adds Hoon Kim, Concierge & Guest Relations Manager at Cape Town’s much-lauded Silo Hotel. ‘Our job is to bring comfort through engagement and ensure that the space through which our guests transit is magical and welcoming.’

Meeting every demand, be it a private helicopter, the latest super-yacht, or even a soccer match with local children, is what makes the role of a concierge timeless, Kim believes.

The origins of the concierge are certainly rooted in hospitality. The word ‘concierge’ can be traced back to the 12th century, but became more widely used some 500 years later when the 17th-century aristocracy of Europe would leave a concierge – a ‘keeper of the keys’ – to ensure the comfort of their guests.

Through the 1800s, with the advent of the great hotels of Europe, the role of hotel concierges came to prominence. With the rise in travellers fanning out across Western Europe on their ‘Grand Tour’, a well-connected concierge was essential for smoothing the path of well-heeled visitors to an unfamiliar city.

In 1929 a boom in the profession sparked the formation of a professional affiliation, what would later become the sought-after Union Internationale des Concierges d’Hôtels, better known as Les Clefs d’Or – ‘The Golden Keys’. Today, the organisation has around 4 000 members worldwide. Of those, just a dozen concierges in South Africa – including Kim, Sadulla and Van Zyl – wear the coveted golden keys on their lapel.

‘The Golden Keys are the Michelin stars of the concierge world,’ says Van Zyl. ‘It’s that exclusive. But it’s also an incredible network. I can call any member in any country in the world and be assured they will be generous with their time and information.’

A NEW AGE OF SERVICE

In that sense, technology has been a boon, helping concierges become more connected with each other. The leading professionals tend to collaborate more than they compete, sharing news, knowledge, insights and access.

Concierges around the globe can connect in minutes to assist globetrotting guests while WhatsApp groups help local colleagues stay up to date with trends, openings and the most sought-after private events.

Whether it’s art, gastronomy, design or wine, it’s information any member of the Golden Keys will have at their fingertips when you approach the desk.

‘Think of us as “memory creators”,’ Sadulla says. ‘We plan, curate and execute experiences for our valued guests that create very special memories of their time in our hotels and cities.’

In Johannesburg, Sadulla has arranged everything from bespoke shopping experiences, with business owners in attendance, to guided art experiences in the company of gallery curators. For wine-loving guests he’s laid on private tastings at the hotel, with the winemaker flown in for the occasion.

‘I’ve also arranged more than 100 engagement proposals and have a 100% record of the ladies saying “yes”!’, he adds.

FROM THE SUBLIME TO…

Those who are experienced have learnt to be discreet when managing requests that either blur the boundaries of acceptability or fall into the downright illegal, but outrageous requests have become folktale fodder among high-end hotel concierges. Across the world there are requests for long-haul breast-milk delivery, life-size chocolate statues and marching mariachi bands.

But for Van Zyl the most outlandish request came from a guest who wanted an elephant. Not stuffed, beaded or embroidered, mind you. A living, breathing Loxodonta Africana, please.

‘He had a wildlife sanctuary in America, somewhere in Texas I think, and he needed an elephant,’ chuckles Van Zyl. ‘That was the most difficult thing I’ve ever had to arrange. It took a while – weeks and weeks of phone calls and paperwork. But we got him his elephant.’

So regardless of the rise of online reservations and mobile applications, the core of what concierges do hasn’t changed. ‘It’s the fact that if a restaurant’s full, a mobile app isn’t going to get you a reservation. If a concert’s sold out, it’s not going to find you a ticket,’ Van Zyl says.

‘Concierges, on the other hand, have the relationships to find guests the things they need.’

This perfectly describes the role of the concierge. Whether it’s an elephant to take home or a seat at the city’s most exclusive tables, it’s a deceptively simple summation of why that concierge desk isn’t going away any time soon. Next time you’re travelling, be sure to tap into the network of those Golden Keys.