The vaccine announcements by Pfizer, Moderna and AstraZeneca over the past few weeks sent financial markets into turmoil, with tech darlings losing substantial ground but ‘unloved’ assets spiking in dramatic fashion. While investors would be naïve to expect the momentum of the violent shift in sentiment to prevail, the assumption that vaccines will soon be available is likely to fundamentally change the outlook for global economic growth into 2021 and 2022. Is it time to relook the investment merits of good companies that were tainted by the negative impact of COVID-19?

Following the devastating impact of the outbreak and spread of COVID-19 on human lives and the global economy, the narrative associated with the virus was the dominating factor driving prices of financial assets. Asset classes and individual assets perceived as benefiting from the so-called risk-off trade, and companies seen as gaining from increased online or digital activity, enjoyed exceptionally strong price behaviour. The contrary was also true, however. Assets regarded as victims of the virus were sold off and displayed dismal price performance. The net result? Unprecedented disparity in the performance of the various financial assets and asset classes.

At Sanlam Private Wealth, we believed this wide disparity created investment opportunities for our clients. Our actions in this regard received a lukewarm reception, however, as cheap assets remained cheap and expensive assets performed strongly when equity markets recovered from the lows recorded in March. In fact, both globally and locally our equity performance lagged the headline benchmarks and we had to review the ‘wisdom’ of favouring unloved shares at the expense of popular and relatively expensive stocks.

As often happens, investors questioned the patience required to reap the benefits of holding cheaper assets when the herd was finding comfort in the popular investment narrative of the day. It’s always extremely difficult to identify a catalyst likely to change investor sentiment to the extent that investors will be prepared to buy the laggards in the market.

To make matters worse, the global number of COVID-19 cases has continued to rise. At the time of writing, there are around 60.4 million confirmed cases and 1.4 million fatalities globally (source: Johns Hopkins University, as reported by CNN Health). Many governments have resumed lockdowns, albeit with a slightly lighter hand than in the northern hemisphere spring. These lockdowns will naturally slow the momentum of the economic recovery needed to sustain the support for equities and other growth assets. Once again, bad news for cheap assets that are struggling to grow revenue or earnings in a constrained economic environment.

It appears the only way to eradicate, or at least contain, this virus is with a vaccine. On 9 November, New York-based drug company Pfizer, in partnership with BioNTech, said it had compelling evidence that its vaccine could prevent COVID-19, followed a few days later by a similar announcement by US biotechnology firm Moderna. On 23 November, UK-based pharmaceutical company AstraZeneca and Oxford University said initial results showed their vaccine candidate to be 'highly effective in preventing' the virus.

This certainly bodes well for other COVID-19 vaccines in development – 12 are currently in phase three trials and six have already received limited approval (four in China and two in Russia). Around 80% of vaccines are usually approved when they reach phase three, so we could see the first vaccines approved soon in those countries.

The US, the UK and India have indicated that a vaccine could become available in December. In Europe, the European Medicines Agency is conducting rolling reviews of the candidates from AstraZeneca/Oxford and BioNTech/Pfizer, which increases the likelihood that we’ll see a vaccine in the European Union before the end of this year.

A RETURN TO NORMAL?

It wouldn’t be far-fetched to assume a gradual post-vaccine normalisation of economic and social activity occurring in advanced economies over the second half of 2021 and into the first half of 2022. In other regions, a return to normal will likely start to take shape through 2022 and well into 2023.

This assumption does indeed appear to have been the catalyst for a change in investor sentiment directly after the announcements by Pfizer and Moderna. Globally, US government bonds – arguably the prime safe-haven asset – sold off, the price of gold and other precious metals retreated, and the world’s reserve currency, the US dollar, was on the back foot. Within equity markets, darling blue-chip technology shares such as Apple, Alphabet, Facebook and Netflix lost substantial ground.

On the other hand, ‘unloved’ assets spiked in an unprecedented manner. Globally, the oil price suddenly strengthened beyond the US$40 level, and locally, the prices of bank shares gained 10% or more, while traditional retail counters bounced noticeably. Many so-called SA Inc counters found favour with investors as shares like Bidvest, Netcare, MTN and MultiChoice traded well above their recent levels.

One of the most pronounced price movements was the performance of the local banking sector relative to the gold sector. In the four trading days following the drug companies’ announcements, banks outperformed the gold sector by a whopping 45%, as can be seen on the graph below. It should be remembered, however, that the share prices of banks will need to sustain this momentum over time if they want to recover the ground lost since the start of the year, as also indicated on the graph. 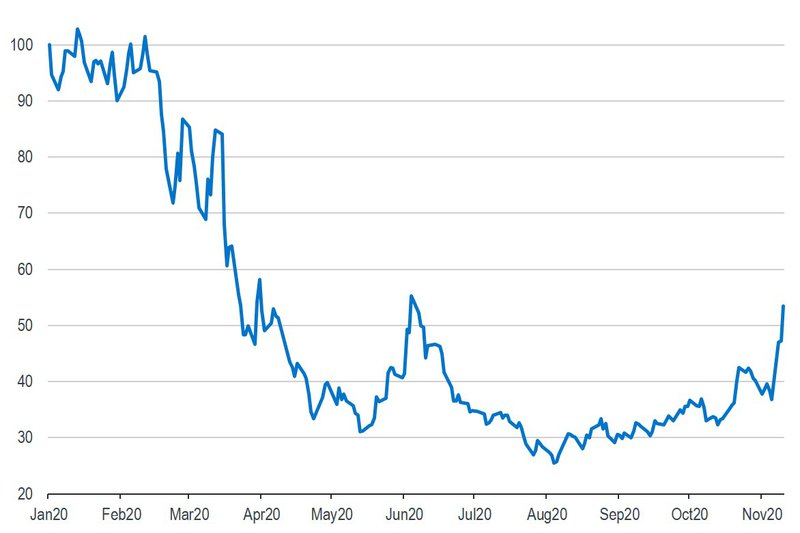 Investors would be rather naïve to expect the momentum of the violent shift in sentiment change seen since the vaccine announcements to prevail – but these turnarounds are often a multi-year trend. There’s little doubt that the assumption that vaccines will be available, and successful, will fundamentally change the outlook for economic growth into 2021 and 2022. The gap from now until we see the benefits of the vaccine is likely to be bridged by economic authorities supporting growth with very accommodative policy measures.

These two factors in tandem are likely to provide enough impetus for investors to relook the investment merits of good companies that were tainted by the negative impact of COVID-19. We trust that the tilts in emphasis in our client portfolios are likely to benefit from this possible scenario over the medium term.