The local wine industry is rife with ambitious new entrants that tend to become the talk of the town for a brief moment, but then fade into near-oblivion as the quality of their wines falls below expectations. One producer that’s stood the test of time, however, is De Toren – the estate’s Fusion V and Z wines have won numerous awards and are still making waves in the local wine world.

The benefit of reaching a certain age or, shall we say, having years of experience, is that one has often quite literally seen it all. As an investment professional I have, for instance, witnessed countless new listings in the local equity market that initially capture investors’ imagination and wallets with brilliant stories, only for the excitement to fade when delivery lags behind.

The world of wine is no different – particularly as the South African wine industry is fairly young compared to those of the old world. In recent years, local wine lovers have seen new entrants explode onto the scene, with a rather alarming proportion of these failing to stay the course as the quality of their products fails to fulfil the initial promise.

One producer that has bucked the trend is De Toren, which came onto the Stellenbosch wine scene with a bang around 20 years ago. The Den Dulk family first acquired seven hectares in the Polkadraai region and two years later the rest of what is today the De Toren wine estate. They released their maiden vintage of Fusion V in 1999.

Fusion V can best be described as a Left Bank Bordeaux blend – a blend of Bordeaux cultivars, but dominated by cabernet sauvignon. When first released, it immediately made waves across the local wine world. Over the years, the wine, which has developed a reputation of being dense and plush, and of ageing well, has received several prestigious awards.

The 2015 vintage was highly acclaimed in the Stellenbosch region, revealing a truly pure and complex flavour, with aromas of blackcurrant, dried plums and a fresh floral undertone. There’s a hint of black pepper that finishes the taste sensation. The mouth-feel is smooth, and there’s no doubt that its elegant tannin structure will carry this wine into the future.

Each luxurious sip offers an exquisitely stylish departure for sophisticated connoisseur tastes. Soft as spun silk, with a lingering hint of sweet fruit on the back palate, this is a wine that will only improve with age. Your enjoyment of this vintage will certainly increase after a few years of ageing in your cellar.

The terroir of the farm has also allowed De Toren to produce merlot grapes of exceptional quality. To provide prominence to this cultivar they’ve created a so-called Right Bank Bordeaux blend, De Toren Z, with merlot as the dominant grape variety.

During a recent private tasting we had the privilege of sampling each of the cultivars individually, and none would have disappointed on their own. The merlot in particular was a big wine. However, in this case, the synergy of the sum of the parts was special.

In tasting the De Toren Z 2015, the impressive merlot is evident. Plum and blueberry lead the flavour spectrum, backed up by rose petals – which are also evident in the Fusion V. The De Toren Z is very clean and fresh, characteristics associated with merlot. Again, soft yet firm tannins provide a great mouth-feel and will provide structure for future ageing. This is a classic Right Bank blend that is hard to find in South Africa. 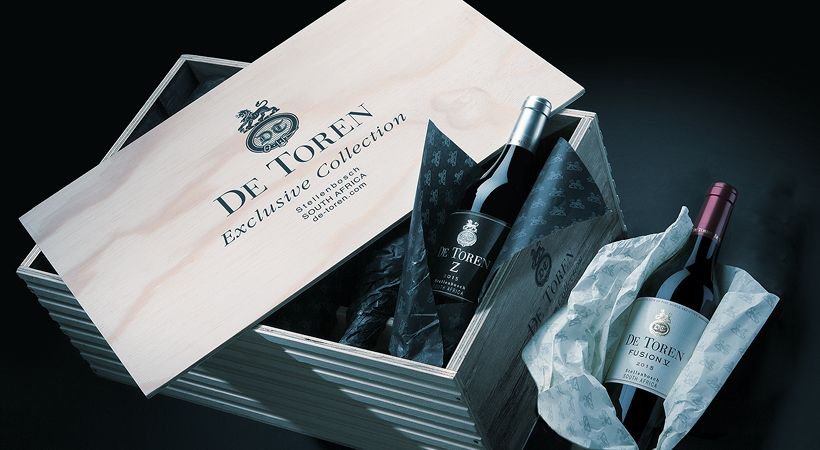