The year 2020 is one that most people would rather forget, and yet, few of us will. In our view, in the years ahead we’ll look back on this one as a reference year – a watershed moment in human history. We were certainly tested to the limits, and the devastating impact of COVID-19 on human lives, as well as the global economy, was tragic and value-destroying. From an investment perspective, however, while the past year was highly unusual, it was not uncommon in the context of investment history over the past 100 years.

It was a year of extremes in financial markets. Equity prices collapsed spectacularly and then recovered in grand fashion. Within the asset class, some sectors became very expensive, and some sold off as if those counters would not survive the economic fallout. Unlike during the global financial crisis in 2007/08, however, economic authorities did everything they could to counter the negative impact of COVID-19 on economic activity levels. At a societal level, the pandemic accelerated developing social and behavioural trends that are now likely to become entrenched in societies the world over.

A RETURN TO NORMAL?

At the time of writing, we have passed 63 million reported cases of COVID-19 globally, and around 1.46 million people have died. The world is now experiencing a second wave of infections during the northern hemisphere winter, but while it continues to rage in the US, its spread in Europe has slowed down. It appears the only way to eradicate, or at least contain, this virus is with a vaccine and we’ve certainly had some encouraging news on this front of late.

The UK was the first country to approve the Pfizer/BioNTech vaccine with a view to starting inoculations as soon as mid-December. Pfizer/BioNTech is set to submit an emergency use authorisation request to the US for their vaccine on 10 December, followed by Moderna on 18 December. In the US, vaccines are likely to be rolled out from mid- to end-December.

This virus will unfortunately not allow itself to be dictated to by a calendar, and we’ll likely continue to see its impact in many regions in the first half of 2021. However, it wouldn’t be far-fetched to assume a gradual post-vaccine normalisation of economic and social activity in advanced economies over the second half of 2021 and into the first half of 2022. In other regions, a return to normal will likely start to take shape through 2022 and well into 2023.

COVID-19 left deep wounds in financial markets. Globally, equity prices collapsed by 34% in dollar terms from late February to 23 March as investors panicked out of equities amid balance sheet and earnings uncertainty. South African equities also sold off aggressively and lost 32% in rand terms – an eye-watering 47% in US dollar terms. Locally listed property lost 50% of its value within a month after the sector had already been on the slide for 18 months.

Usually, bonds act as a shock absorber during a crisis. Investors at first didn’t buy the sovereign bond thesis and initially, US sovereign bond prices came under pressure. However, when investors were eventually assured that the US Federal Reserve was prepared to buy these instruments, bond prices did exactly what they normally do in a crisis – they appreciated, despite the fact that bond yields were already trading at historically very low levels or, conversely, very high prices.

Unfortunately for South African bond investors, local bonds were not treated as safe-haven assets. Investors’ risk-off mentality led to an aggressive sell-off of the rand, cast more doubt on South Africa’s ability to service its debt, and ultimately provided a trigger for sellers to exit the asset class. The yield of local 10-year government bonds spiked from 8.73% to 12.11%.

However, another safe haven came to the fore. The gold price in dollar terms displayed a price pattern similar to that of global bonds. Initially, the gold price lost 11% during the financial assets sell-off, but then made a spectacular recovery, gaining 38% from the lows recorded in March until it peaked in early August.

These extreme price movements didn’t happen in a vacuum. The impact of the virus on the mobility of people had dire consequences for economic activity both locally and globally. Certain industries came under severe pressure. Workers lost their jobs – in the US, the unemployment rate exceeded the 20% level – causing economic activity levels to collapse. In South Africa, we experienced a collapse of economic activity of 51% on the seasonally adjusted annualised rate in the second quarter.

The impact on economic activity triggered an extremely aggressive policy reaction from economic authorities, ranging from measures to create liquidity, dropping the price of money or interest rates that were already at historically low levels, and massive fiscal stimulation that benefited and supported individuals, companies and other institutions. On the back of this ‘no holding back’ approach by authorities, we’ve seen a highly aggressive or V-shaped response in high street (economic activity) and ‘Wall Street’ or financial markets.

As mentioned, it was certainly a year of extremes – an extremely sharp fall in equity prices was followed by an equally astounding recovery. Companies seen as gaining from increased online or digital activity enjoyed exceptionally strong price behaviour. The contrary was also true, however. Assets regarded as victims of the virus were sold off and displayed dismal price performance. The net result? Unprecedented disparity in the performance of the various financial assets and asset classes. Perhaps one of the best illustrations of this trend is the market capitalisation of electric motor manufacturer Tesla relative to the cumulative market capitalisation of 12 global motor manufacturers: 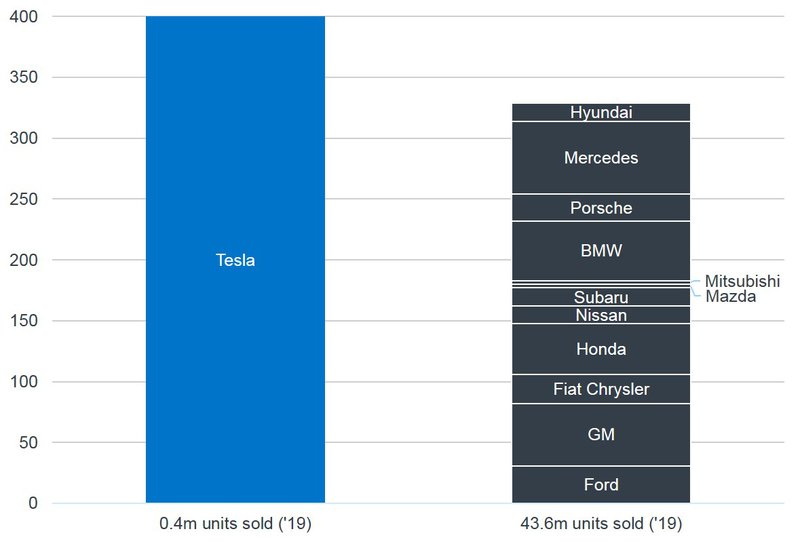 The Nasdaq Index, which is dominated by information technology stocks, has recorded a return of 38% since 1 January compared to the 13% return by the broadly defined S&P 500 Index over the same period. The trend over the past 11 years was one where value stocks were ignored by investors, while shares with higher earnings visibility and better growth stories associated with them received the most investor attention.

This trend accelerated in 2020, as the liquidity created by authorities landed in the hands of non-professional investors, who were very happy to speculate on these ‘story’ shares. These speculative views were vindicated as the ‘bets’ paid off for investors. We’re of course not for one moment arguing that the so-called FAANG companies (Facebook, Amazon, Apple, Netflix and Alphabet, formerly known as Google) are not real and large global businesses, and highly profitable. Millions, if not billions of people use their products and services every day. But the fact remains that the valuation gap between popular growth shares and unloved value shares opened further to levels rarely witnessed in the past.

The South African equity market also acted rather schizophrenically in the initial recovery. Gold shares responded aggressively to the higher gold price, as many of the South African gold mines are marginal operations and the higher gold price would logically lead to exponential growth in profits. Other mining shares also performed admirably in the initial recovery. However, so-called SA Inc shares didn’t share in the recovery – many investors questioned the financial viability of these shares given the dire state of the local economy. Concerns about our economy also alienated foreign investors, who were sellers of both local equities and bonds.

Just as we thought the trend was entrenched for the year, however, positive news on vaccine roll-outs presumably acted as a catalyst to strengthen interest in risky assets, particularly unloved assets. Value shares started to dictate the pace of price recovery within the equity market. Locally, the SA Inc universe recovered rapidly, while selected safe-haven assets were sold to acquire these shares. Gold stocks were the biggest victim. The changes happened unannounced, and the quantum was material. In fact, investors were either positioned well and benefited from the extreme momentum change, or they were incorrectly positioned and were left flailing in its wake.

In the final analysis, a few macro themes likely to play themselves out over the medium term have started to gain momentum. The increased trade tension between the US and China, which was very prominent in the Trump era, will remain a reality and is likely to spread wider as China seeks to grow its international standing. The consequence will be potentially lower international trade over time, with associated negative economic consequences.

Inequality both within and between countries was pushed to the forefront sharply during 2020. It’s also not limited to wealth and income – a trend that’s quickly emerging as a political force globally, is the intergenerational gap. Addressing this issue is likely to put more pressure on tax revenue in future. Lastly, the high valuations of technology companies come with a ‘story’ – one of rapid technological change that’s both positive and disruptive, but which results in both winners and losers in not only the tech sector, but also the wider global economy.

It was indeed an eventful year, with significant volatility on the financial markets, as well as extreme challenges for humankind in general. It might well be remembered as a watershed year, with many softer trends gaining momentum. From an investment perspective, however, it may be surprising to learn that while the past year was certainly unusual, it wasn’t all that uncommon. Over the past 100 years of investment history, financial market collapses of this magnitude are not unprecedented. They don’t occur regularly, however, even though the meltdown of 2008 is still fresh in our memories.

We therefore trust that ongoing support from authorities and the successful roll-out of COVID-19 vaccines will provide the backdrop for continued global economic recovery and appreciation of financial assets, offering investors a just return for investing in these assets in 2021.