ABSA: HUNGRY TO
TAKE BACK ITS LUNCH

South African banking shares have been highly volatile in recent times, subject to wild swings in investor sentiment. However, the banks’ earnings streams have been relatively robust, as a high proportion of their revenues is derived from annuity-based sources. The banks have also worked hard on cost savings while bad debts have remained under control. The combination of volatile share prices and relatively stable profits has created trading opportunities for valuation-driven investors. In our view, Absa currently looks the most attractive from the perspective of valuation relative to expected growth – we’ve therefore recently included the share in our portfolios.

South African banking remains a concentrated industry, dominated by a few rationally behaving private sector companies with scale advantages and brand trust. The market structure is therefore conducive to appropriate profitability. Banking share prices have been subject to increased levels of volatility of late, however, resulting from sharply fluctuating investor attitudes towards the local economic and political landscape.

Banking share valuations are now again appearing attractive relative to their own histories as well as the rest of the market on key valuation metrics such as price-to-earnings ratios, dividend yields and price-to-book ratios. These valuation levels have historically been good buying opportunities for banking shares despite prevailing macroeconomic concerns at the time.

The key drivers of the current low bank valuations are the well-documented concerns about the government’s finances and the likely sovereign credit downgrade by Moody’s rating agency, and the weak economic growth rate. There’s also uncertainty around a number of government policies under debate that could have far-reaching consequences, such as expropriation without compensation, prescribed assets and the independence of the South African Reserve Bank.

While these may hold material risks to the banking sector, we do expect that a government that has arguably reached the end of its own financial means and which will have to court private and foreign capital to support growth, will be forced to ultimately implement rational policies.

Weak economic growth is certainly constraining revenue growth for the banks and increasing the number of bad debts as consumer disposable income and company profits come under pressure. However, we expect that the sector will still be able to continue to grow its profits over the next few years, driven by cost efficiencies through digitisation, cross-selling of other financial services to large customer bases and growth from the rest of the continent.

While some consumer pressure is evident in rising bad debts, the banks’ bad debt ratios are still running at low levels versus their history, as credit growth has been relatively constrained over the past five years. Banking crises usually occur after periods of unsustainably high credit growth, which has not been the case for South African banks in recent years.

With regard to a possible sovereign credit ratings downgrade, we’re of the view that the market has likely already priced in this event, as is evident in the yields on our government’s debt, which are in fact higher than those of already downgraded emerging market peers such as Brazil. Also, banking shares in Brazil performed quite well following that country’s downgrade, after being weak in the run-up to the event.

We haven’t had exposure to Absa in our house view portfolios over the past decade, despite the fact that the share appeared cheap relative to peers during most of this time. We preferred the better managed (FirstRand) and growth-positioned (Standard Bank) banks. Banking shares were highly correlated in the past, which made switching between them uneconomical. However, the valuation gap between the banks we owned (FirstRand and Standard Bank) and those we didn’t (Absa and Nedbank) has opened up to historical highs.

Despite negative perceptions of Absa’s management, its earnings and dividend growth has remained positive over the past seven years, although slower than peers. Absa’s slower growth is likely the result of its higher exposure to home loans, which have lagged the industry since the global financial crisis. The group has also suffered market share declines in retail banking as a result of slow reaction to product innovation by competitors and conservative lending enforced by its former parent, Barclays PLC. Absa has, however, been relatively efficient at managing operating costs, especially at branch level.

Following its independence from Barclays and the adoption of a less hierarchical and better incentivised operating model, we’re seeing early signs of Absa regaining market share of revenue in its retail bank. While the traditional banks will struggle to grow their retail client bases as Capitec takes mass market share, there’s an opportunity for Absa to improve the cross-sell and up-sell of financial products to its large existing customer base – an area where the group has been lagging competitors.

Lending growth for Absa should also improve by simply reverting to its historic fair share of the market’s volumes. Finally, we expect Absa to continue to benefit from relatively better growth from its rest-of-Africa operations (20% of earnings), where the bank is positioned fairly well from a geographic point of view.

The banks remain a difficult sell in the context of negativity towards our market, but as we’ve seen in the past, valuation is ultimately the most important driver of the sector’s future returns. As shown in the chart below, Absa is currently trading on a forward price-to-earnings ratio of only 6.5 times, which is extremely low relative to its own history. The expected dividend yield over the next year is a healthy 8.8%. 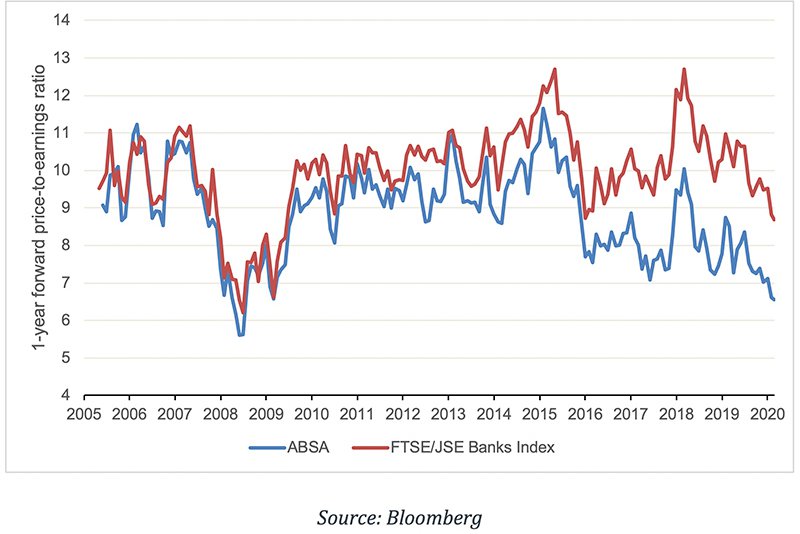