It all just keeps going up – consumer inflation seems to keep on hitting new highs. One of the main culprits is, of course, the war in Ukraine. Supply-side shortages resulting from the conflict have exacerbated global price increases, particularly those of fuel and food. How have ordinary South African consumers been impacted? And how are the major retailers responding to consumer pushback against price hikes?

In 2020, Russia accounted for 11.6% of global oil production, but due to sanctions imposed on that country, fuel prices have gone through the roof. In South Africa, the petrol price has increased by 36% since January, from R19 to R26 per litre. This impacts households in the lowest income quintile the most – around 10.7 million people, who mainly use taxis.

Most of these consumers spend more than 20% of their monthly household income on transport and as a result of the higher fuel price, which is likely to go up even more, a larger proportion of monthly income will now have to be allocated to transport, leaving far less disposable income for other discretionary items.

Another factor eroding disposable income is food inflation, which is a global concern given that the war in Ukraine has driven both wheat and sunflower oil prices higher. Before the conflict, Ukraine accounted for over half of global sunflower oil exports, but the price has now almost doubled.

When prices go up, households in the lowest income quintile cut back almost immediately on certain items they consider luxuries, such as dessert and eating out, and reprioritise the basics – rice, maize meal and cooking oil. In March this year, there was panic buying of cooking oil in South Africa on fears that prices would go up further. The price of sunflower oil has risen by 55% since then.

Given the high-inflation environment, the South African Reserve Bank (SARB) will be on alert and will likely raise interest rates further in order to tame inflation. Lower overall inflation benefits households across the income spectrum, but containing food price inflation helps poor households most of all, since these households often finance the spending gap through credit cards and store credits.

Statistics South Africa estimates that the ratio of household debt to nominal disposable income is around 66.2%, which means that a significant portion of income is spent on servicing debt. Following last week’s SARB rate hike of 75 basis points, the market is pricing in a further increase of 25 basis points for the remainder of the year, which will put additional pressure on consumer wallets.

Retail sales data released by Statistics SA indicates slower growth on discretionary items, as can be seen on the table below. There has also been a normalisation in home improvement shopping as the pandemic has eased, with hardware, paint and glass sales down 7%. Given the altered environment, we expect the underlying growth in discretionary retail sales to lag food as consumers continue to reprioritise their budgets against the backdrop of high inflation and fuel prices.

Retail trade sales at constant 2015 prices for the latest three months by type of retailer: 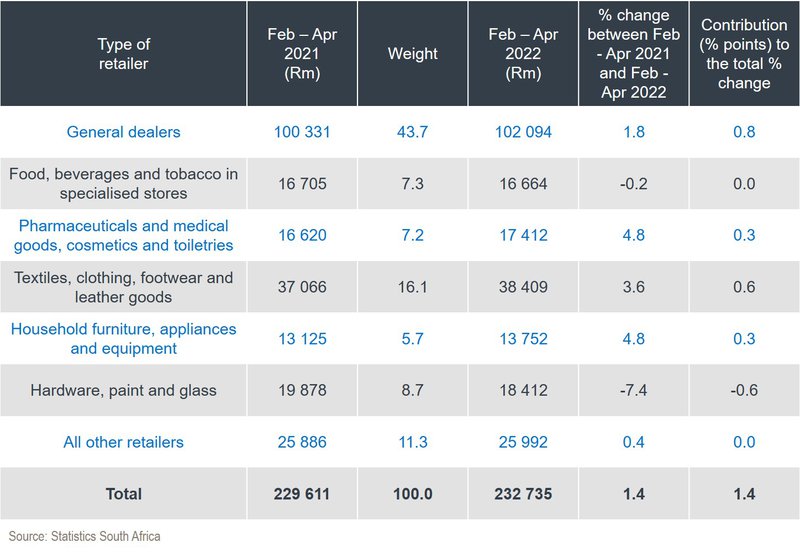 High inflation has a significant immediate impact on food producers, since it can’t be passed on to retailers immediately – some producers have long-term contracts with retailers containing an element of fixed pricing.

The big question is: how well are South Africa’s major retailers positioned to cope with the consumer headwinds set out above? How are they responding to the inevitable pushback from consumers against ongoing price hikes?

In 2016, the Shoprite Group launched its ‘R5 campaign’ by subsidising its 600g inhouse bakery bread, and the company has ensured that the price remains at R5. In 2017, the initiative was expanded by including deli meals for as little as R5.

From Usave to the Checkers brand, the group’s divisions are aiming to assist consumers at all levels of the income spectrum. Based mostly in remote areas, Usave offers a limited assortment of the most popular and basic grocery items. Checkers Sixty60 operates from 266 stores, making up 5% of the group’s total revenue. The Xtra Savings rewards programme launched around two years ago now has over 23 million members. Data collected from Xtra Saving and Checkers Sixty60 will assist in target marketing as consumers reprioritise their budgets.

Pick n Pay lags Shoprite on capital expenditure, but the group aims to catch up by increasing its Boxer store base to compete at the lower end of the market. The group’s Smart Shopper rewards programme, launched 10 years ago, has over 9 million members. Pick n Pay recently completed the centralisation of its supply chain and other services, reducing costs and improving the accuracy and responsiveness of distribution.

The South African stores of Spar typically cater to a slightly wealthier demographic than Shoprite, which may give the business a degree of protection relative to its more value-oriented peers. Spar operates a franchise model and has a strong presence in Europe – in Switzerland, Ireland and Poland. Poland is still a relatively new venture and is still loss-making against the backdrop of supply chain and retailer contract issues. Spar is allocating capital expenditure on SAP implementation and is increasing its on-demand Spar2U app reach.

In our view, Shoprite is better positioned than its peers to absorb pressure from consumers, given its strong supply chain and customer loyalty programmes. Generally, the top line should benefit from high inflation, partially countered by volume declines. We think that higher inflation will be net positive to total nominal retail sales over the next 12 months.

Given the not insignificant headwinds discussed above, we expect a cutback on discretionary spend over the next year as consumers’ disposable income is eroded by higher prices for basic needs. Against this backdrop, from an investment point of view, we prefer food retailers over fashion retailers.