After a particularly tumultuous 2018, investors could be forgiven for feeling they were waking up to 2019 nursing a massive hangover. Both global and local financial markets took a severe beating over the year, and investors in higher risk asset classes such as equities and property were left bruised. While the key macro themes that dictated market direction in 2018 are likely to continue, we don’t believe the current asset class risk-return relationship is the ‘new normal’. In our view, equities and property are still likely to outperform lower risk assets such as bonds and cash in this investment cycle, and we’ll continue to position our clients’ portfolios accordingly.

Watch Alwyn discuss the macro trends that unfolded during 2018 and the prospects of financial markets in 2019 (you can also read a transcript of his comments).

2018 was truly an annus horribilis for many investors, with just about all major asset classes ending in the red. As can be seen on the graph below, in US dollar terms, global equities fared the worst, losing more than 8% of their value. Bonds also performed dismally. The only asset class with a positive US dollar return was cash, which gained just over 1.8%. 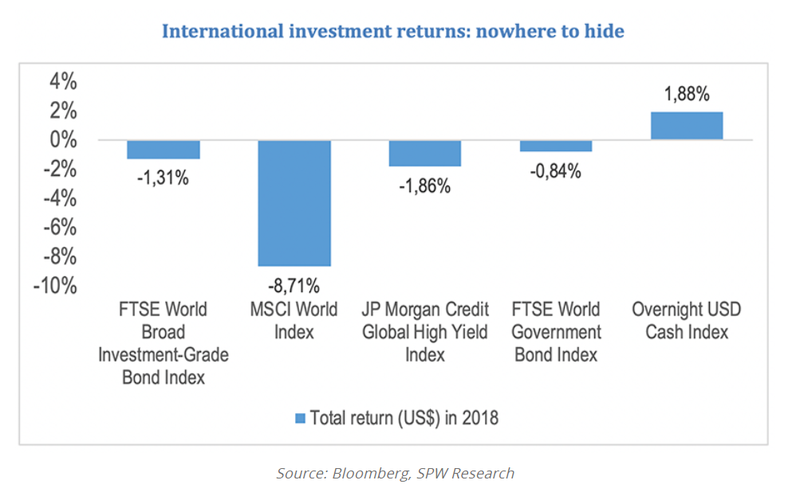 Our local market continued its pedestrian performance of the past four years. The big loser was listed property, which had returned -1.2% over the past three years but in 2018 suffered a whopping 25% loss. The year also ended on a sour note for the equity market, which lost around 8.5% of its value. Again, the only asset class that came up trumps was cash, which delivered a decent 7.3%.

It’s with regret that we acknowledge that South African investors have not been rewarded for the risks taken in investing in growth asset classes – equities and property. We’re now seeing disillusioned investors questioning the traditional risk-reward relationship associated with shares and listed property, with some looking to lower risk asset classes in the hope of enhancing overall returns and reducing the risk in their investment portfolios. When equities underperform over the short term, jittery investors often ignore tried-and-tested long-term investment principles and sell off at precisely the wrong time, which more often than not costs them dearly in the long run (see our recent article on the continued case for equities).

So what can investors expect from financial markets in 2019? From a global perspective, it became clear during 2018 that the synchronised growth narrative may be running its course. While we’re not by any stretch of the imagination suggesting that we’re in recession territory or a global recession is imminent, there are several indications that global growth is slowly starting to lose momentum.

Despite firm employment numbers in the US, it’s clear that manufacturing activity is slowing, the housing market is showing early signs of saturation, and credit growth is slowing in the region. Elsewhere, Europe is only just keeping head above water, Japan remains trapped in a low-growth environment and China is no longer growing at 7%-plus.

There are also a few well-documented tail risks – external events or issues that could have a major impact on the economy and investor sentiment – which emerged during the course of 2018 and look set to leave their mark in 2019:

The main ‘macro trend’ which continues to pound market sentiment in South Africa is the low economic growth trap from which our country is struggling to escape. In addition, we have a general election coming up in the second quarter of the year, and in the run-up we can expect increased irresponsible and inflammatory rhetoric from politicians across the spectrum – which is guaranteed to scare markets. In a low-confidence environment, South Africa can ill afford further fear-mongering – what we desperately need are investor-friendly government policies that support economic growth.

South African entrepreneurs will invest only if they’re confident they’re likely to generate an acceptable return on their investments. In this uncertain environment, they’re unlikely to be making any major investment decisions before the outcome of the elections is known. We’re therefore of the view that we shouldn’t expect too much in terms of local economic growth for 2019 – a realistic figure would be something between 1.2% and 1.7%.

If global economic growth does slow down, it’ll be challenging to maintain any semblance of growth momentum in our own economy going into 2020. In October last year, the International Monetary Fund (IMF) downscaled its global growth forecast for 2019 from 3.7% to 3.5% – the figure for China has been adjusted from 6.8% to 6.1%.

What does all this mean for investors, and for asset allocation? In global equity markets, we’ve enjoyed a 10-year bull market, which has for a while now appeared rather long in the tooth. So while we believe it was the correct call to have an aggressive position in global equities during the lengthy upwards surge, the risks have increased and we’ll now remain marginally underweight in this asset class.

We’re not for a moment forecasting a collapse in global equity markets. But with slowing profits and stocks trading at above-average price levels relative to their earnings, we believe it prudent to recalibrate our portfolios to reflect our expectations from this asset class: the performance we’ve experienced over the past decade is unlikely to repeat itself over the next three years.

Our local equity market has unfortunately not shared in what’s been called the longest bull run since World War II – after an initial five-year boom, the South African market moved largely sideways and has delivered lacklustre returns over the past four years.

But whereas some investors are questioning whether to remain invested in locally listed shares, we are seeing value emerge. Despite the pedestrian outlook for economic growth, many shares are now trading at low valuation levels, presenting interesting opportunities to add attractively priced, quality shares to our clients’ portfolios. While we’re currently underweight in local equities in our multi-asset class portfolios, we’re likely to return to weight and even take an overweight position in this asset class over the remainder of the year.

While we can’t predict a decent return over the next 12 months, what we can say is that in this investment cycle – five years and longer – we believe local equities can generate returns that will justify the risk of investing in this volatile asset class. This may, however, mean taking contrarian views and picking unpopular stocks – because they offer value.

Over the past four years, it was hard to argue for exciting returns from property companies. Precisely because this asset class had such a dismal 2018, however, prices are now looking attractive and there are real opportunities to buy quality stocks. Yields are high enough to justify an investment in this asset class – so we’ll be increasing exposure for our clients over the coming months.

Bonds have traditionally been seen as shock absorbers in multi-asset class portfolios – they provide protection against equity market shocks resulting in sell-offs. Global bond yields remain unattractive – the 10-year US government bond yield is currently trading at around 2.8%. Since inflation poses little threat, it’s hard to expect bond yields to kick up significantly. Despite low prospective returns in the global bond market, however, the increased risk in financial markets does justify some exposure to bonds in our clients’ portfolios.

The local bond market, on the other hand, continues to offer attractive returns, with the 10-year bond yield currently at around 9.3%. Our main concern, however, is that the fiscal position of our government has deteriorated significantly over the past decade. Despite reasonable return prospects, we’ll therefore continue to exercise caution and are unlikely to take an aggressive position on South African government bonds.

THE CASE FOR CASH

The cash portion in our clients’ portfolios is slightly higher than is desirable – however, this is simply a reflection of our view that financial markets currently dictate a more conservative cash position. Cash provides security, but it also offers optionality – to take advantage of opportunities that may arise in either the property or equity markets for the remainder of the year.

Financial markets are dynamic, so at least over the short term, some of the key macro themes of 2018 – which are likely to continue in 2019 – have already been priced into risky assets such as equities and property. However, it’s investor sentiment that moves markets more than anything else over the short term, and these global tail risks – and at home, the national election – will still have the potential to create volatility and a rocky road ahead for investors.

Investor sentiment impacted over the short term by macro uncertainties, especially political uncertainties in South Africa, will in turn have an effect on price. Although it’s of course challenging to get the timing on cheap local shares just right, in our experience, a good investment decision is always taken on price. And if we can buy decent-quality companies at a reasonable price, it would be fair to expect that the return on investment will beat cash over the current investment cycle. With patience, value will almost certainly be unlocked. We’ll therefore continue to position our clients’ portfolios in accordance with the traditional risk-return trade-off investors have always relied on.