Developed markets have for the past decade outperformed emerging markets handsomely, with investors tending to associate the latter with excess volatility and political uncertainty. However, if commodity prices remain firm and global economic momentum is sustained, the tables may well turn in favour of emerging markets again. How should South African investors approach opportunities in these markets in the context of their portfolios?

When I started my career 15 years ago, it was the common view in the market that emerging markets will outgrow developed markets over the long term for a few simple reasons:

Indeed, emerging market economies in general grew much faster than developed countries, and between 2002 and 2011 their stock markets materially outperformed – only briefly interrupted by the 2008/2009 global financial crisis. Advising South African clients to buy equities in developed markets was a tough task in 2011, given their 10-year underperformance.

However, since 2011, the tables have turned, and developed markets, led by the US, have outperformed emerging markets handsomely. Nowadays, emerging markets are more associated with excess volatility and political uncertainty. The perception of higher risk and lower returns doesn’t do well for investor appetite.

The chart below is one I’ve always found interesting – it clearly shows that portfolio managers can add value by providing the correct relative tilt at the right time in investment portfolios. The chart shows the relative performance of both emerging market and South African equities versus developed market equities. 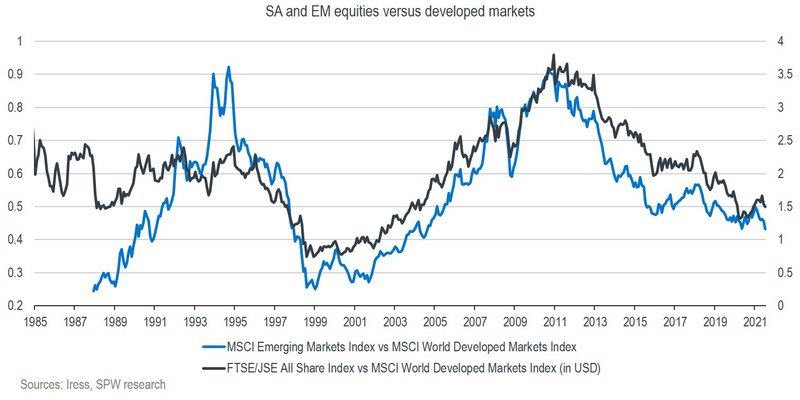 A few things stand out from this chart: 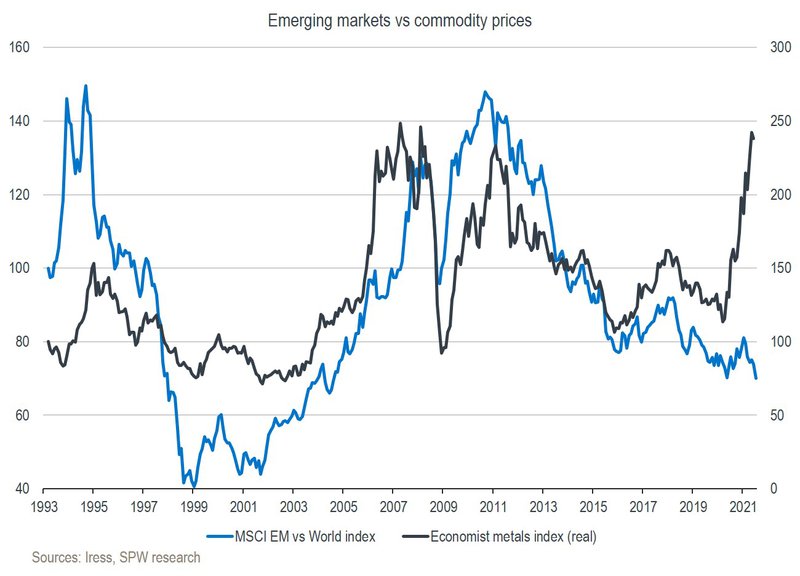 Covid-19 had a devastating impact on the world economy in 2020, which prompted governments worldwide to quickly support their economies through both fiscal and monetary stimulus. This has resulted in a strong recovery in equity prices, driven by the prospect of a strong economic rebound from 2021. A sharp rise in commodity prices is also reflecting this view.

While history suggests that emerging markets should outperform during times of strong global growth and high commodity prices (where we are now), this hasn’t been the case yet year-to-date. Emerging markets have continued their trend of underperformance that started back in 2011.

This is likely due to:

Should commodity prices remain firm over the next few years and the global economic momentum can sustain itself, it would be reasonable to expect that emerging markets may start to outperform again as their relative earnings improve and current valuation appears more attractive than developed markets. Emerging markets are currently trading at a 30% discount to developed markets on a forward price-to-earnings ratio basis. With vaccines now readily available, emerging markets should also start catching up rapidly on this front over the next few months.

How should South African investors approach the emerging market opportunity in the context of their portfolios? As mentioned earlier, the numbers show limited diversification benefit for holders of South African equities in investing in other emerging markets. The MSCI Emerging Markets Index has a large exposure to Chinese internet companies as well as the commodity cycle. The JSE is exposed to similar themes through Naspers and its large mining sector.

Investors in balanced portfolios do receive better diversification benefits from developed market equities when combined with local bonds than they do with South African or other emerging market equities. However, there will likely be a cycle when emerging markets outperform again, and investors would like to then have a higher exposure in their portfolio.

Such an environment should be beneficial to local equities, but I believe the appropriate approach would be to manage the South African and emerging market exposure in a combined fashion and benefit from the wider investment universe (and lower country-specific risk) that such an approach would offer – without taking on too much correlated risk in the context of the total portfolio.

GOLD: WHEN TO INCLUDE
IT IN YOUR PORTFOLIO

INVESTING IN THE
NEXT GENERATION