is it time to panic?

There’s a saying in financial markets: ‘If you panic, panic first.’ This certainly seems to be the prevailing sentiment right now on both global and local equity markets. Since late August, share prices have come under severe pressure, and many jittery investors are questioning whether they should remain invested in equities at all. In our view, the markets may be a scary place at the moment, but now is not the time to panic and bail out.

Following an almost uninterrupted surge in share prices since February 2016, global equities have declined by 7% in US dollar terms over the past two months. On our own stock market, the picture is also rather gloomy. As measured by the FTSE/JSE All Share Index (ALSI), shares sold off aggressively and are on average trading 15% below their values recorded late in August (see the graph below). Unfortunately for local investors, this decline has come after an almost four-year period during which local share prices moved sideways against a very pedestrian economic backdrop. 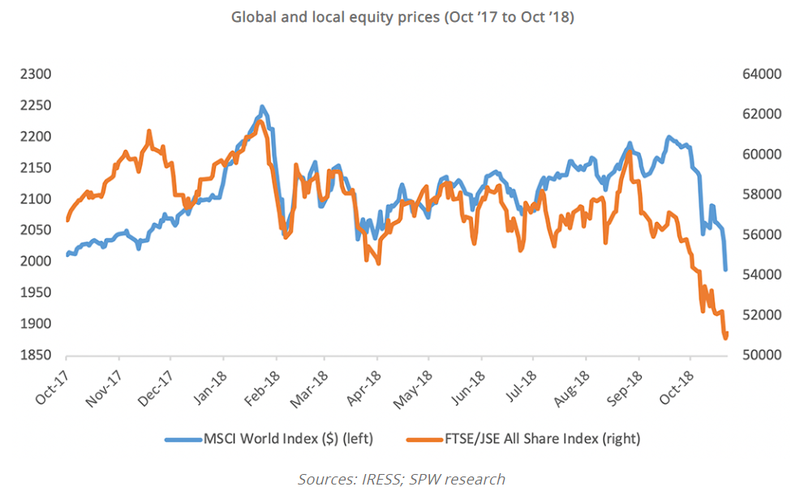 The issues associated with volatile and lower share prices, both globally and locally, are of course not new. In June this year, we argued that investors got overly excited with the positive story after the election of Cyril Ramaphosa as our country’s new president, and that banking and retail shares became too expensive as a result – they later retreated to more realistic valuations. We therefore trimmed Standard Bank in our portfolios. On the other hand, rand hedge shares were, in our view, too cheap at that time.

The poor performance of local shares since mid-2014 has more than once led to analysts questioning the wisdom of continued investment in this asset class. In our view, however, history suggests that over time, the relationship between risk and returns will continue to hold (see our article in August this year, in which we make the case for equities). In simple terms, if investors buy decent-quality companies at a reasonable price, it would be fair to expect that the return on investment will beat cash over the longer term. Investors often ignore this ‘law’ when equities underperform or when the news flow is particularly dismal.

Of course we’re not for one moment suggesting that investors shouldn’t manage the asset allocation of their portfolios actively. Four years ago, we argued, for instance, that South African shares were too expensive and that we preferred offshore to local equities. We started to change our view early this year, however, when our analysis suggested that the valuations of local equities are on average starting to look more attractive. This is the crucial point: our view is that based on price, local shares are starting to offer attractive long-term, inflation-beating investment return prospects.

In August, we said ‘investors considering leaving (SA) equities at this stage are ignoring the lessons of history at their own peril’. Since we expressed this view, equity prices have fallen by 12%. So were we wrong? It’s simply too early to tell. We like to be measured over the longer term, or through an investment cycle, as sentiment can drive asset prices way off their intrinsic values.

We still maintain that price, perspective and pattern will drive future performance. Perhaps the most tangible way to explain this is by using the example of Standard Bank to illustrate how these three factors combine to produce future returns.

We believe Standard Bank is cheap – the price is low – in terms of its own history when the share is trading at a price-earnings (P/E) multiple of nine times. If we monitor the five-year share price performance of Standard Bank after each time it traded at a nine-times P/E multiple, over the past 40 years, we should be able to determine if there is a pattern in the share price performance following periods of low prices. The table below provides the evidence: 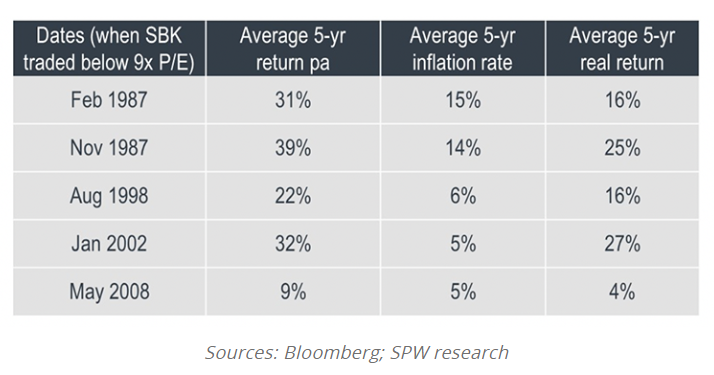 The table clearly illustrates that every time Standard Bank traded below a P/E ratio of nine times, the following five-year returns comfortably and sometimes spectacularly outperformed inflation. We would argue that the likelihood of this pattern continuing is high.

Many cynical investors will be quick to point out that we’re ignoring the current perspective of a local environment of extreme policy uncertainty and low economic growth. This observation is true – which is exactly why we won’t venture a strong view of what will happen to the Standard Bank share price over the next 12 months. We simply can’t forecast events over the short term, let alone in a year in which we’re holding general elections.

However, what we can say is that each time the Standard Bank share traded at low levels in the past, the cheap valuation was largely influenced by negative news flow. November 1987 saw a global market meltdown following significant interest rate increases in the US. In 1998, the South African banking industry had to navigate its way through exceptionally sharp interest rate hikes after the emerging market crisis. The sell-off in global shares in 2002 weighed on our equities, and in 2008 we had to wrestle our way through the biggest economic crisis since the 1930s Great Depression.

It’s thus safe to argue that in the past the best buying opportunities have been created by negative news flow. It should be pointed out, however, that these dates didn’t represent the bottoming out of the Standard Bank share price. They were simply arbitrary points (nine times P/E) that we picked as a low price.

Is the current equity market slump different this time? If South Africa doesn’t fall over the proverbial cliff, we don’t think so. We believe there’s a strong likelihood that history will repeat itself – unlike scientists, investors tend not to learn from and build on lessons from the past. Standard Bank isn’t the only example – there are plenty of South African listed shares that offer inflation-beating prospective returns. On average our equity market offers enough upside over the cycle to compensate for the risk investors take. To put it bluntly: now is not the time to panic!