it’s not yet a done deal

Will they or won’t they? As the local market holds its breath for the next round of sovereign credit rating reviews by the world’s major rating agencies in December, this is the question that has been uppermost in the minds of investors for some time now. Earlier this year, most economists agreed that a fall to ‘junk’ status seemed inevitable. However, there is now increasing optimism that we may yet be able to dodge the downgrade bullet.

Since we last wrote about this contentious subject in May this year, both Moody’s and S&P have kept their credit ratings on South Africa’s government debt unchanged, although both ratings reflect a negative outlook, indicating the risk of a future downgrade.

Compared to certain other emerging markets, our current position is as follows: 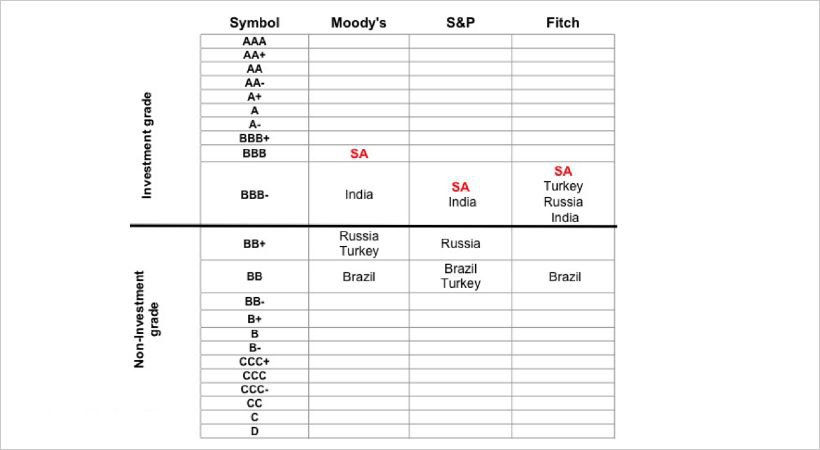 THE IMPACT OF ‘JUNK’ STATUS

As we’ve said before, it’s hard to find any positive outcomes for our economy in the event of a downgrade. But looking at our financial markets, it may not have much impact, provided that it was expected and accounted for in asset prices. If one looks at how the markets of countries that have lost their investment grade rating in recent years performed before and after becoming ‘junk’, it’s clear that in general, the currency, equity prices, budget and current account deficits deteriorated in the run-up to being downgraded, but then stabilised and often improved after the event. The muted reaction of the markets after the downgrades was a result of asset prices having moved ahead of the event.

The most direct impact of a lower credit rating would be seen in the cost of South Africa’s foreign-denominated debt. The chart below shows a comparison of the cost to insure certain governments’ foreign currency debt against default. It’s noteworthy that South Africa is already priced in line with other countries that are rated ‘junk’ by one or more rating agencies. 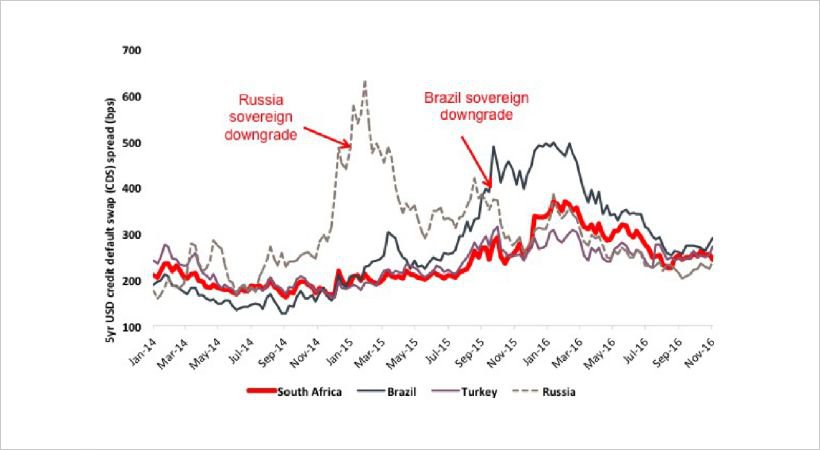 DOWNGRADE NOT A CERTAINTY

Although turmoil and uncertainty on the political front may yet prove to be the final decider for the rating agencies, many industry players and observers now believe the feared downgrade at the end of the year is not yet a done deal. Remember, it is about judging South Africa’s creditworthiness. The stabilisation of commodity prices during 2016 has led to increased optimism, as has the expectation that we may now be nearing the end of the drought. The recovery of the rand has also played a significant role in the outlook for inflation and interest rates. On balance, these events have all contributed to marginally better growth prospects and an improved ability to service debt.

We’ve had peaceful municipal elections with a shift in power towards the opposition, and recent ‘victories’ for the offices of the Public Protector and our Finance Minister have confirmed the strength of some of our institutions. Furthermore, initiatives towards better cooperation between government, labour and business to avert a downgrade have certainly counted in our favour.

From people talking around the braai to media reports, there’s much speculation that the rating decision will hinge on political events, such as the student protests or whether President Jacob Zuma stays or goes. However, the rating agencies predominantly base their decisions on the numbers, with particular emphasis on South Africa’s longer term economic growth outlook, and whether they’re confident that our government will manage the country’s finances prudently. The credibility of our Finance Minister and his Treasury plays a crucial role.

Rating agencies have been sympathetic towards South Africa’s current lack of economic growth, influenced by weak external demand, which has had an impact on exports, as well as the drought, which they see as temporary. The expectation is that economic growth will start recovering into 2017 as these headwinds dissipate. Other positives include the more reliable electricity supply, which had previously hampered growth, as well as an improved outlook for inflation following the recovery of the rand, and prospects for lower food prices, which may open the door for interest rate cuts next year.

The major rating agencies still assess South Africa’s institutional strength as high, and it is in this arena where political instability has the potential of accelerating a downgrade decision. If we can avert this, then the next step to retaining our investment-grade rating is to prove that we can reignite longer term economic growth by introducing the necessary structural economic reforms that will make South Africa a more business-friendly environment. The imminent threat of a downgrade has provided the impetus for better cooperation between government, business and labour, but it remains to be seen whether policymakers will eventually push through the necessary reforms in the future given the various vested interests and social demands.

A LAST NOTE ON ASSET ALLOCATION

Despite the threat of a downgrade, we increased exposure to banks in many of our client portfolios as well as to government bonds in our asset allocation portfolios earlier this year. Our reasoning was based on valuation and our view that the market had already priced in the downgrade at the time – almost a case of ‘heads I win, tails we draw’.

Both of these investments have performed well since, but the good performance wasn’t so much driven by investors’ view on whether we would be able to avert a downgrade as was it by the improved investor sentiment towards South Africa’s emerging market peer group, driven by a recovery in commodity prices and the delay in interest rate hikes by the US Federal Reserve.

South Africa’s dollar-denominated debt is still trading in line with the likes of Russia, Turkey and Brazil, which are already rated non-investment grade by S&P. The market doesn’t seem to distinguish us from the others simply because of our current better credit rating.