which is the better investment?

Economic theory states that in general, it’s better for investors to gain exposure to commodities by investing in the companies mining them rather than in the commodities themselves. Does this also hold true for industries with deep, labour-intensive mines and above-inflation annual cost increases, such as gold and platinum-group metals (PGMs)? We look at the South African gold and PGM industries over the past 30 years – which has been the better investment: the mine or the metal?

Investors wanting exposure to the commodity sector have often been advised to invest in the mining companies instead of the underlying commodities – the main reason being that unlike the metals they mine, the companies have the ability to add value over time. A miner can invest in an asset that produces metal at a low cost and make a high return on the capital invested over the life of the mine. The money made can then be invested in new, profitable projects, or returned to shareholders.

In practice, the reinvestment of capital has often destroyed value – the returns on the invested capital have been below the cost of capital for the mining industry over the past few decades. But in general, mining companies have substantially outperformed the prices of the metals they produce over the longer term.

From a trading perspective, it’s also not always feasible to invest directly in the underlying commodity. Storage costs can be immense. If you invest in a commodity futures contract, the cost of rolling the contract over time can decrease your value materially.

The gold industry in South Africa dates back more than 100 years, and has been shrinking rapidly over the past few decades. In 1995 the industry employed about 380 000 people, but today that number is fewer than 115 000. Like the platinum sector, it’s dominated by deep, labour-intensive mines. The influence of labour unions has resulted in costs increasing at rates of 2–4% above inflation per year for decades, making the industry globally uncompetitive.

Indeed, when looking at the performance of the rand gold price against that of two of the oldest gold companies in South Africa (excluding AngloGold since it was unbundled from Anglo American only in 1998), the yellow metal far outperformed the miners.

Cumulative return of gold companies vs the gold price 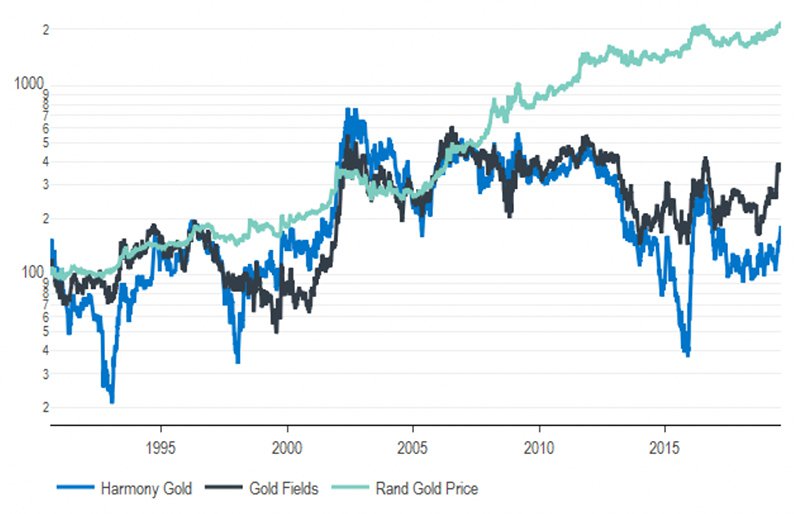 A TALE OF TWO DECADES

The platinum industry is dominated by supply from South Africa, which provides more than 70% of new mined platinum globally. Like gold mines, South African platinum mines are predominantly situated a few kilometres below surface. The industry has also been plagued by above-inflation annual cost increases. Combined with a static basket price for PGMs (we assume a basket of 60% platinum, 30% palladium and 10% rhodium), this has resulted in metal prices outperforming the mining companies’ share prices over the past 10 years.

Cumulative return of platinum companies vs the platinum price 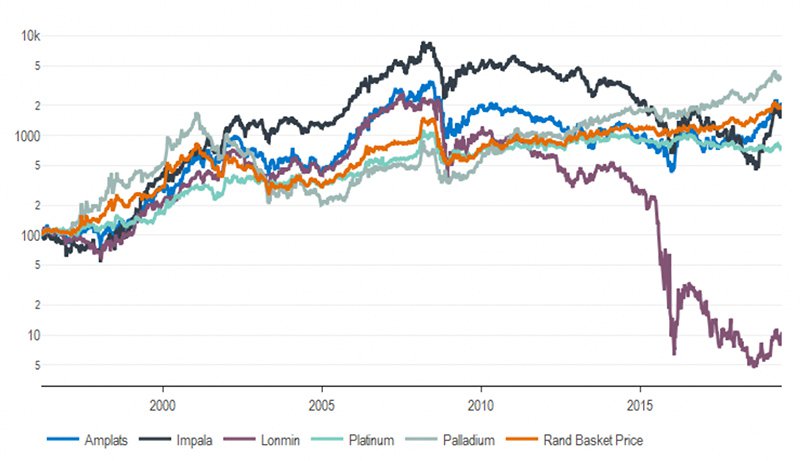 It really is a tale of two decades for the platinum miners, as can be seen in the chart below. From 2000 until the financial crisis in 2009, the miners outperformed the metal basket price over most rolling five-year periods. This can be mostly explained by the rapid adoption of auto catalysts in petrol and diesel vehicles in the late 1990s to early 2000s. However, after the financial crisis, the metal outperformed the company over every five-year rolling period. This is largely the result of a period of demand stagnation, increased secondary supply and large above-inflation cost increases over this decade. 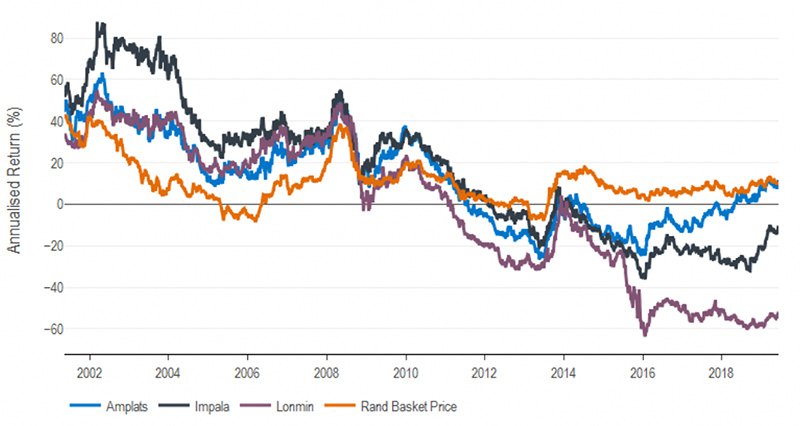 Wage negotiations are currently taking place in the PGM industry, and on the back of the recent recovery in palladium and rhodium prices, the miners will struggle to plead innocence with the unions. The Association of Mineworkers and Construction Union (AMCU) has asked for unrealistic wage increases. Based on our sources, we think it likely that they’ll again settle for at least CPI+2% over the next three years, further threatening the longer-term sustainability of the sector.

Concerns over sustainability in these deep conventional mines are reflected in the conduct of industry players. Impala is currently undertaking significant reforms at its main production hub in Rustenburg, where the company plans to cut production by 25% and its workforce by 30%, or 13 000 people. Lonmin has been cutting production over the past three years and is also in the process of reducing its workforce by around 12 600.

With the only open-pit PGM mine in the world, Mogalakwena, Amplats is in the best position in the industry. This palladium-rich deposit has the potential to be significantly expanded, with a resource life of over 100 years. Valuation aside, we prefer Amplats to its rivals in the industry – we own the share indirectly through our position in diversified miner Anglo American, which owns 70% of Amplats.

In the South African gold and PGM industries over the past three decades, it would clearly have been better for an investor to own gold and, in the PGM industry, palladium (trading costs aside), instead of the companies mining them.

This doesn’t mean that investing in gold or PGM companies is never a good investment. We want to avoid the sector over longer time periods, but sometimes it does provide opportunities, as evidenced by the rolling five-year returns of the platinum miners. There have been several five-year periods in which it would have been better to own the company rather than the metal, where the company provided returns of more than 20% per year for five years! The important point is that these companies’ shares should be traded tactically as opposed to being held for the long term.

From an investment perspective, we prefer to gain commodity exposure through diversified miners Anglo American and BHP, as we believe these companies to be more robust and less risky. However, we may from time to time take positions in single-commodity PGM and gold producers if we believe the risks are sufficiently in our favour.