Reaction to Finance Minister Tito Mboweni’s much-anticipated second Medium-Term Budget Policy Statement (MTBPS) last week has been mixed. While drawing praise for his straight talk, the Minister came under fire for the dearth of solutions in his presentation. He certainly pulled no punches in painting a decidedly gloomy fiscal picture. We were disappointed, however, that he failed to reveal any clear action plan to address the three most crucial issues crippling our economy: fiscal slippage, state expenditure and debt stabilisation.

It was with a wry smile that I read former DA leader Tony Leon’s observation in Business Day in which he stated that ‘this Medium-Term Budget Policy Statement (MTBPS) is the grimmest and most difficult in a generation’. If I consider our views after the Budget Speech in February, I’m not sure much has changed since then. We noted that all the important fiscal ratios were pointing in the wrong direction, while at the same time, ordinary South Africans were urgently demanding improved service delivery. The local economy was struggling to grow at a rate faster than consumer inflation, the Eskom debacle was tangible, and the numbers were frightening.

Finance Minister Tito Mboweni thus had to present his first Budget Speech to Parliament in a challenging economic and political environment. Leading up to the event, we all speculated whether he would be brave enough to address the obvious overspending on government consumption to reduce expenditure in relation to gross domestic product (GDP) that would ultimately stabilise government debt levels in 2023/24. Our conclusion was that while the narrative looked promising, the numbers remained deeply concerning – and the margin of error too small for comfort.

As the year unfolded it became obvious that our scepticism was not unfounded. Hence, Tony Leon’s observation. The Minister, quite frankly, still faces exactly the same challenges that he did in February. The only difference is that he now has more realistic numbers to work with in the fiscal prudence balancing act – with no economic tailwinds from an income perspective.

Most importantly, the MTBPS is another policy intervention in which the Minister had to show his hand on the likely fiscal and economic paths of the Ramaphosa administration. The market is looking for guidance or information in the following areas:

Our initial response regarding these three areas is one of disappointment.

The immediate revenue shortfall and spending cuts, as well as the FY19/20 main budget deficit (6.2% of GDP) match our own, as well as market forecasts.

However, the medium-term fiscal projections have worsened materially and also relative to expectations, as Treasury has effectively made politicians responsible for negotiating the significant interventions required to achieve its proposed new fiscal target of a main budget primary balance (revenues equal to non-interest spending, excluding Eskom support) by FY22/23. The main budget deficit is forecast to widen to 6.8% of GDP in FY20/21 from the new 6.2%.

We fully acknowledge that politicians can hardly claim historic success when it comes to expenditure challenges.

As stated above, we expected the Minister to be realistic about income, since measures to boost it over the short term are rather limited. Tax revenues are projected to be a disappointing R52.5bn less than the 2019 Budget estimates in FY19/20 and R84bn in FY20/21. The FY20/21 forecasts are more conservative than ours, which would suggest an extreme soberness on the part of the Minister.

This shortfall implies that the Minister has had his work cut out on the expenditure side to address the shortfall. However, for FY20/21, the main budget non-interest spending still increases by R23bn owing to the additional injections for Eskom (announced after the 2019 Budget), but spending is now projected to be R8.2bn lower in the following year. In FY22/23, spending will grow in line with consumer inflation, in other words, there will not be real spending growth.

The focus of these savings efforts is on improving efficiency and reducing wasteful expenditure, while government claims it will:

A major disappointment was the absence of a detailed financial strategy for Eskom, and other financially troubled SOEs. ‘Some debt relief will be provided to Eskom over time, as operational and financial performance improves,’ the Minister stated. Cost reductions and progress with the unbundling process are two of the prerequisites for any such considerations. This debt-relief process will be managed to ensure ‘any default and cross-default on total Eskom debt is contained’ and creditors ‘are treated equitably’. Most operational changes are expected to be implemented before the end of 2021.

The biggest disappointment and shock was the revised gross debt-to-GDP path projections: 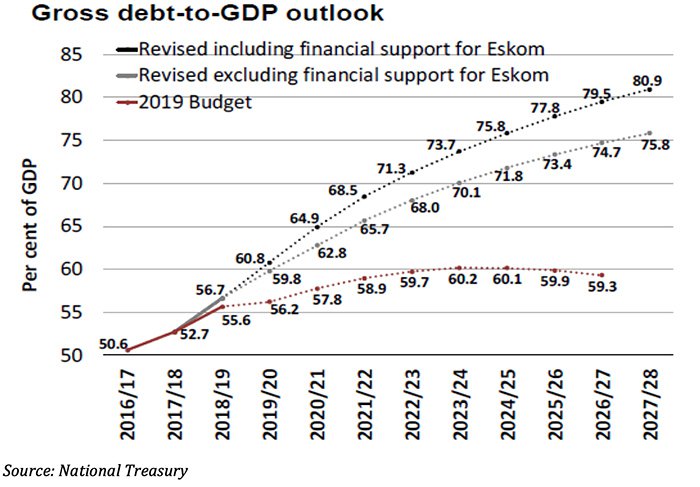 Total gross loan debt is budgeted to rise to a revised 60.8% of GDP in 2019/20, much higher than the 56.2% forecast in the February 2019 Budget Speech, and to continue rising to 71.3% in 2022/23. Even excluding Eskom bailouts, the figures are unflattering, with a move to 68% over the period. Financing will remain mainly longer term and sourced in domestic markets.

Financial markets responded aggressively to the lack of detail in terms of expenditure intervention and the financial strategy regarding Eskom, as well as fundamentally different projections of the medium-term debt-to-GDP. The rand fell sharply from its opening levels of R14.62/US$ to R15.02/US$, and the yield on the R186 – the seven-year government bond – sold off from 8.21% to 8.42%.

Investors are obviously concerned about the medium-term funding implications of the increased debt levels and the view rating agencies are likely to take on the mentioned concerns. When Treasury previously published an MTBPS that set out the unsustainable fiscal path that South Africa would travel in the absence of decisive intervention to change course, S&P downgraded South Africa’s sovereign ratings while Moody’s placed our country’s rating on review. Last week, despite the bleak reality confirmed by the MTBPS, Moody’s again spared us a sovereign credit rating downgrade to non-investment grade – which would have resulted in the exclusion of South African government bonds from global bond indices, triggering forced selling of our bonds.

Moody’s did, however, change the rating outlook from stable to negative, implying a material risk that the rating may be revised downwards in the near future. The agency has noted that the rating may be downgraded if further economic and financial evidence suggests government won’t be able to implement its fiscal and economic strategy to halt and ultimately reverse the debt trajectory. In particular, the February 2020 Budget will be a key indication for Moody’s on whether the government is committed to fiscal consolidation.

The equity markets’ response to the MTBPS was quite predictable given the slide of the rand. Rand hedge shares responded positively while the SA Inc complex, like the banks and retailers, came under pressure after a recent bounce in these prices. If we witness a continuation of extreme price movements of individual counters, it may well trigger action in our portfolios – we will sell expensive shares and buy shares that are unfairly penalised.

A final note: It was indeed a difficult speech to deliver. Our observation is that the Minister painted an extremely sober fiscal picture, but with clear political constraints hampering brave fiscal reform. Maybe this was his way to get his urgent message across to his co-Parliamentarians:

‘Now is the time. We cannot wait any longer. If we want a successful harvest, we must act today.’

We trust there will be more evidence of political will to intervene to get South Africa back on a sustainable fiscal path when the Minister delivers his main Budget Speech in February 2020.