the jaws of the crocodile

If there’s one thing we need to give our Finance Minister, Malusi Gigaba, credit for, it’s honesty. He certainly told it like it is in his mini budget speech on Wednesday. His assumptions were far more realistic compared to those of his predecessors. But what sent financial markets into a tizzy was what we’d like to describe as the gaping jaws of the crocodile – our huge national debt – and no real plans to prevent those jaws from clamping down on us.

In his maiden Medium-Term Budget Policy Statement (MTBPS), Minister Gigaba didn’t beat around the bush in setting out the fiscal predicament of our government. At the time of the 2017 budget speech in February, hope that South Africa would return to a sustainable fiscal path was created, and the forecast then was that our fiscal position (specifically, our national debt as a percentage of GDP) would improve over time. What shocked the market on Wednesday was how much this picture has changed. In fact, the graph rather aptly resembles the jaws of a crocodile: 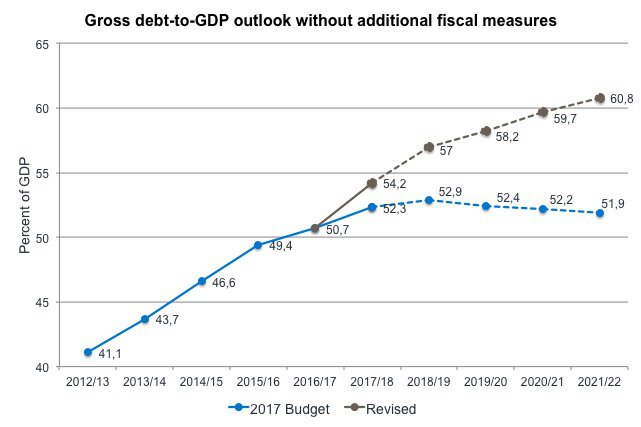 As the graph shows, the prediction in February was that our debt-to-GDP ratio would flatten out at around 53% and then roll over towards less than 52% heading into 2022. In Minister Gigaba’s new forecast, there’s no sign of fiscal consolidation. He told Parliament that a sharp deterioration in revenue collection, partly as a result of further downward revisions to economic growth projections, had eroded government’s fiscal position to the extent that gross national debt is now projected to reach over 60% of GDP, to the amount of R3.4 trillion, by 2022.

The financial markets didn’t take this news well at all, as evidenced by the negative reaction of our currency, but more importantly, a sell-off in government bonds by 30 basis points. But it wasn’t only the numbers – grim as they are – that surprised and shocked markets. It was also the lack of any kind of credible solution to address these crucial issues. We saw no measures to increase fiscal consolidation, and no strategy to reignite the economy on a path of sustained growth.

Our Finance Minister was clearly not brave enough to look into the mouth of the crocodile and do what needs to be done to stop those jaws from snapping shut – set out definitive plans to both increase revenue and decrease expenditure.

In order to stabilise gross debt below 60% of GDP over the coming decade, Treasury would need to introduce tax hikes amounting to 0.8% of GDP – which in the 2018/2019 fiscal year will amount to R40 billion. But in a low-growth economic environment in which many South Africans are struggling to make ends meet, introducing further tax burdens will be an unpopular decision. In terms of boosting economic growth, Minister Gigaba offered no new initiatives to tackle structural issues such as unemployment and skills development.

South Africa’s expenditure is still increasing faster than inflation, and the mini budget clearly reflects a lack of political will to curtail spending. What seemed to rattle the markets, however, was that despite expenditure cuts being crucial for fiscal consolidation, disconcerting amounts are still being directed at loss-making state-owned companies.

In fact, Treasury has committed to a further R14 billion to be dished out to the troubled South African Airways and the South African Post Office. To add further insult to injury, these bailouts are to be funded partly by selling off assets, including government’s share in Telkom.

The stark reality of our fiscal dilemma will of course not be lost on the rating agencies, who are now more likely to respond with further downgrades by the end of the year.

As a result of the rand’s tumble following Minister Gigaba’s speech, rand hedge shares on the JSE have done particularly well. With holdings such as British American Tobacco, Richemont and Naspers, our clients’ portfolios have fair exposure to rand hedges – companies that generate a significant portion of their income outside South Africa and are thus partly protected against rand weakness. We’ve also recognised that South Africa’s fiscal position is rather fragile. We therefore reduced the exposure to longer-dated government paper in our multi-asset class portfolios earlier this year.

The task of getting back on the path of fiscal consolidation is, in the words of the Minister, ‘not going to be an easy one’. However, we can structure portfolios to protect clients’ investments against risks associated with this path.