2018 is a significant year for two heavyweights in the financial services sector: Sanlam and Old Mutual. But whereas Sanlam is celebrating its centenary, Old Mutual – an even older company – will execute its so-called ‘managed separation’ project, which will lead to the closure of its UK head office and complete the reversal of its internationalisation strategy of the 2000s.

Two ships crossing the Atlantic receive notice of a mega-storm heading their way. One of the captains reacts with caution, reroutes and misses the storm by 200km, leading to an extra day’s travel time. The other captain decides to take his chances, holding his course until the last moment before diverting out of the storm’s way, missing it by 1km and saving his passengers a great deal of time.

Now imagine that rather than missing the storm by 1km, the speed of the storm catches the second captain by surprise. The ship breaks up in the storm, and for hours the captain manages to swim half the passengers to safety before drowning from exhaustion. Two days later all the newspapers sing the praises of this heroic captain, while nothing is ever written about the captain of the first ship that quietly sailed into port the previous evening. As a passenger, which captain would you have preferred?

In the investment world, great turnaround stories usually capture media attention and the people in charge who produce these turnarounds for investors are highly regarded. But in truth, the management teams we should appreciate even more are those who don’t necessarily make the headlines, but who don’t put their companies in a position where heroic turnarounds are later required.

We can draw an analogy from the story of the two captains to the different paths of two of South Africa’s top financial services companies – Sanlam and Old Mutual. Whereas Sanlam is celebrating its 100th year in business, Old Mutual, established in 1845, will this year complete its ‘managed separation’ process, including splitting into three separate businesses, and the winding down of its London head office.

Both Sanlam (1998) and Old Mutual (1999) demutualised just before the turn of the century when ownership converted from policyholders to shareholders. But there’s been a material difference in the returns for Sanlam and Old Mutual shareholders since demutualisation. As can be seen on the following graph, with dividends reinvested, a R100 000 investment in Sanlam then would be worth R2.9 million today, while the same R100 000 invested in Old Mutual would now be valued at R633 000. 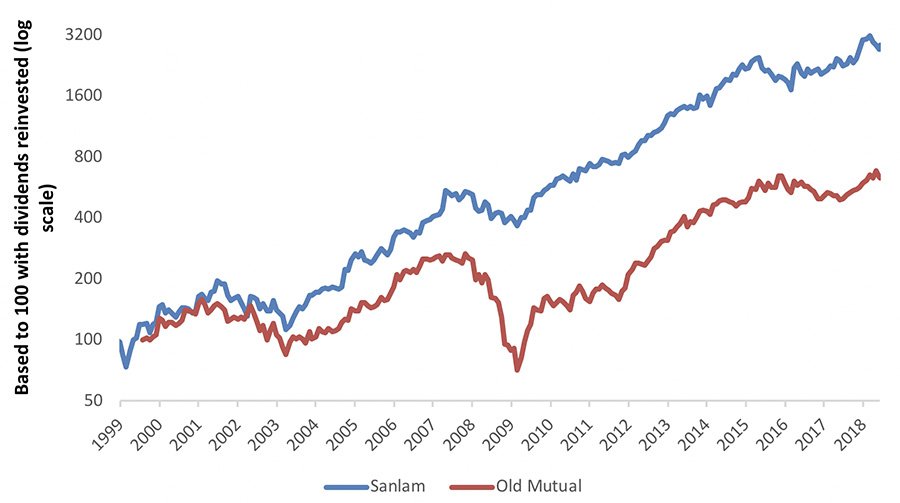 Most of Sanlam’s outperformance occurred between 2003 and 2009. Old Mutual led an aggressive strategy of international expansion at a time when the rand was weak and international markets expensive. Sanlam, on the other hand, focused more on its domestic market and expansion into the rest of Africa. The global financial crisis of 2008 and 2009 brought Old Mutual to the brink of bankruptcy when market losses in its US and Bermudan businesses threatened the survival of the rest of the group, which had guaranteed the debt. Old Mutual’s share price recovered well after the financial crisis, however, as markets normalised and it managed to dispose of a number of its international businesses.

Today, Old Mutual is a much simpler and more focused group compared to a decade ago. It consists of three business units:

All three businesses are in reasonably good shape, well capitalised and growing. However, the market price of Old Mutual has persistently traded below the sum of the fair values of these businesses.

There are a number of likely reasons for the discount in the share price:

Old Mutual’s managed separation will attempt to unlock this conglomerate discount by separating the three business units and putting each back in the hands of its shareholders. The company will also close down its UK head office, which will save costs. Another important consequence of separately listed businesses will be increased market scrutiny, which should better incentivise the respective management teams’ performances.

The timing of the managed separation seems fortuitous for Old Mutual shareholders, given the high ratings on which the closest in-country peer of each business unit is currently trading:

Old Mutual had to cut back on its dividend payment over the past two years in order to reduce debt and capitalise the individual business units in preparation for the separation. Following the recently announced disposals of a UK asset manager and the Latin American operations, the proceeds from the sale of 9.6% of Quilter to external investors and wind-down of the head office balance sheet, the individual businesses will likely find themselves with excess capital. We believe this will result in special dividends from both Quilter and Old Mutual Limited in the near future.

We bought Old Mutual at a time when investors were disillusioned by poor management decisions and the impact of those decisions on the company’s growth path. Since the purchase, the Old Mutual share price has actually outperformed that of Sanlam. Our patience with the shareholding is likely to provide further reward should logic prevail during the final stages of the unbundling process.