– Trump: how did this happen?

‘I don’t want to sugarcoat anything. Nothing is easier, much will be difficult.’ The candid words of German Foreign Minister Frank-Walter Steinmeier the day after the shock election of Donald Trump as the next president of the United States echoed sentiments worldwide. Incredulity quickly turned to pragmatism however, as world leaders had to accept that the real-estate mogul from New York was now one of them. Even the Oracle of Omaha, billionaire investor Warren Buffett, called for ‘coalescence’ behind the President-elect. The message is clear – despite disappointment and uncertainty, we have to move forward in a positive way in a new global era likely to be rife with challenges but also exciting opportunities.

In our last ‘On My Mind’ column around a month ago, we cautioned that polls and predictions can be notoriously wrong, and that the unthinkable may yet become a reality in the US presidential election. And indeed it did. The Republican candidate’s victory is one of the biggest political upsets we’ve seen in a long time, and the world is still grappling with the soon-to-be reality of Trump at the helm in the White House. There will no doubt be much introspection going forward. The big question is, of course, how on earth did this happen?

THE ELEPHANT IN THE ROOM ...

As did the Brexiteers in the UK earlier in the year, the American people have made an unequivocal choice – against the establishment and the prevailing narratives, and for radical change. The overriding sentiment is that the ideals of liberalism and the story of globalisation over the past 20 years have benefited the wealthy, but the middle classes and the poor in the West have not shared in the spoils. Increasing inequality the world over and general discontent with austerity measures have spurred the rise of populist movements – not only in the US but also in growing separatist campaigns throughout Europe.

The trend has been captured in the by now well-known ‘elephant chart’ (see below) – so named due to its distinctive shape – devised in 2012 by World Bank economist Branko Milanovic. The chart shows the changes in global income distribution between 1998 and 2008. As Milanovic explained at the time, the global top 1% consists mainly of people from advanced economies, of whom half are Americans. The biggest losers of globalisation are those in the 80th to 85th percentile of the global income distribution, whose income gains over the period essentially amounted to zero. He called these people a ‘global upper-middle class’. Seven out of 10 people at this point are from the ‘old rich’ Organisation for Economic Co-operation and Development (OECD) countries.

Fertile ground indeed for a populist leader like Trump, whose successful harnessing of middle-class resentment may also encourage anti-globalists hoping for similar results in upcoming European elections, including the Italian constitutional referendum in December, and elections in France, the Netherlands and Germany next year. 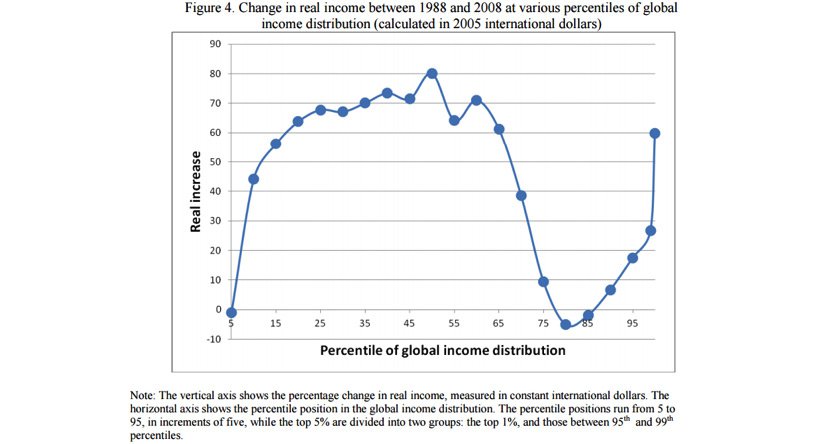 … WHICH LEAVES GOVERNMENTS WITH A MAMMOTH TASK

I believe we’re witnessing a backlash against the status quo, the likes of which we last saw during the Arab Spring in 2011 – with the difference that people are now demanding change not through popular uprising, but via the ballot box. The directive to Western governments is indisputable – if they want the ideals of liberalism and the benefits of globalisation to continue, they’ll have to radically rethink the way the income pie is currently being divided. The Trump win is a wake-up call for governments to take concerted action to ensure the frustrations of the middle and working classes are addressed. How this is to be effected will have to be the subject of some serious soul-searching by the powers that be over the months to come.

WHAT DOES IT ALL MEAN FOR INVESTORS?

As our Director of Investments, Alwyn van der Merwe, pointed out in a note to investors last week, much depends on whether or not Trump’s populist policies (or proposals, to be more precise) are actually translated into meaningful action. US President Barack Obama said earlier this week that Trump would certainly face a ‘reality check’ if he attempts to implement his most extreme election promises once in the Oval Office. In addition to there being a vast difference between electioneering and the realities of public office, he will also have to get his policy agenda through both houses of Congress first, so nothing is likely to happen overnight.

What could lead to growth in the US and will therefore have a positive impact on the markets are his plans to stimulate the US economy through additional infrastructure spending, tax cuts and deregulation. His ambitious infrastructure plans will certainly be good news for commodity-producing countries such as South Africa and other emerging markets.

These potential positive impacts may well be derailed, however, should some of his isolationist and protectionist campaign rhetoric become policy. If he does interfere with existing trade arrangements such as the African Growth and Opportunity Act (Agoa), it may have far-reaching consequences for South Africa as well as the rest of Africa. We can only hope pragmatism will trump the severe populism of his election rhetoric.

There is unfortunately no crystal ball we can peer into, so what the longer term fall-out of Trump’s victory at the polls will be is anyone’s guess. We really are in uncharted territory, with the script being written as each day, or even hour, unfolds. What we do know is that we have a new leader of the free world. And we want to see him succeed in terms of pacifying the discontent that got him elected, while still reviving growth, and without excessive and damaging moves on international trade agreements.

In the face of uncertainty as to where the US President-elect’s emphasis will fall, a degree of market volatility and economic fragility is likely to remain with us for some time to come. The see-saw of events on a macro level is challenging to investors from an emotional perspective, to say the least – for example, Trump’s appointment of Steve Bannon, editor of ultra-conservative website Breitbart News, as his chief strategist, has already drawn strong criticism from various quarters.

As we mentioned at the series of client events we held across South Africa recently, the ‘noise’ around a macro event such as the election of Trump is often highly testing for investors. It’s important to remember, however, that times like these can provide good long-term investment opportunities. We’ll of course be keeping a close watch on unfolding events while remaining committed to our long-term investment philosophy and process.