PLATINUM SECTOR:
DO WE NEED TO BUCKLE UP?

The platinum group metals (PGM) sector has performed very well in general over the past year on the back of a strong rebound in global car sales, but since the end of April, we’ve seen a dramatic slump in the prices of these shares. Should investors be concerned? What’s the outlook for PGMs? In our view, the recent price corrections are overdone – while the longer-term prospects for the sector remain uncertain, we’re still upbeat about its potential over the medium term.

Since we last wrote about the PGM sector in July last year, the prices of platinum, palladium and rhodium have surged following a significant uptick in global car sales (the metals are used mainly in auto catalysts), more than offsetting a supply recovery after Covid-19-related stoppages. Since the end of April, however, prices have declined sharply off high levels. At the time of writing, palladium was down more than 30% to below US$2 000/oz, platinum was down 25% to below US$1000/oz and rhodium declined by more than 50% to ~US$14 000/oz.

While these are massive corrections, it’s worth noting that despite these falls, palladium and rhodium prices are still very high (while platinum prices remain low) by historic standards, as can be seen on the chart below: 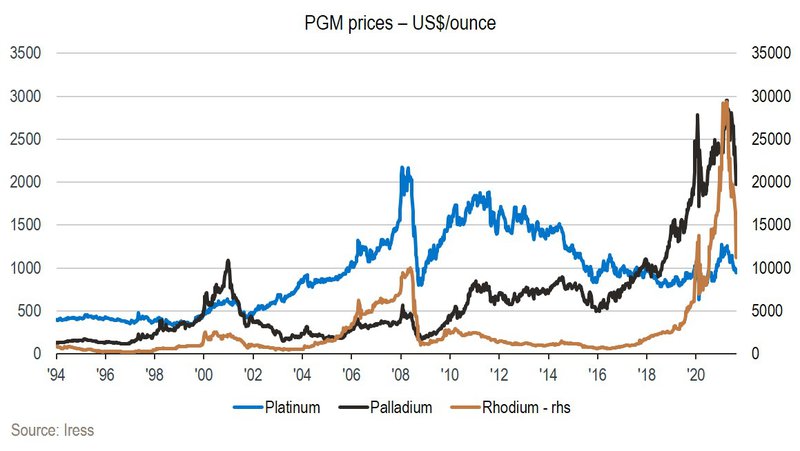 The recent price corrections are likely explained by lower car production on the back of a global chip shortage. With almost all palladium and rhodium destined for the auto market, it makes sense that the corrections have been more pronounced in the case of these two metals. In our estimation, the impact on new car production has already been more than eight million units (in the context of a total market of 92 million new cars sold in 2019). This has resulted in car inventory levels declining to multi-decade lows and a boom in the second-hand car market.

The situation remains fluid, but this does appear to be a temporary problem likely to resolve itself towards the end of this year and into early next year. There should also be some pent-up demand as carmakers restock their inventory pipelines.

The more salient question is whether the acceleration of new electric vehicle sales will affect the medium-term investment case for PGMs. In our view, the medium-term outlook (until roughly mid-decade) still looks quite favourable for the basket of metals, with the demand side still strong (as higher loadings per vehicle more than offset lower internal combustion engine sales) and supply growth still muted after a decade of underinvestment (current projects largely serve to offset the decline in the existing base over the next few years). Our best assessment is therefore that the market is currently in a sweet spot and that we’re likely to still see prices hovering comfortably above marginal cost levels for the next few years.

The longer-term outlook for PGMs is more uncertain since it’s now clear that electric vehicles will become the dominant drivetrain. Some industry estimates are for new battery electric vehicle sales to be as high as 40% of total new car sales in 2030, up from ~3% in 2020. This has a big negative impact on the demand for PGMs (especially palladium and rhodium), as a battery electric vehicle doesn’t need a catalyst. To compensate for this, in our price estimates for 2025 onwards, we use much more conservative estimates for palladium and rhodium than current spot prices.

The potential offsetting factor to the loss of demand due to an increase in electric vehicles is the rise of hydrogen as an alternative fuel (especially in larger cars and trucks where driving range is more important), where PGM-based catalysts are also needed. While the outlook remains unclear, it does seem as if governments now realise that hydrogen needs to be part of the solution if the world is to reach its emission reduction targets.

Increased hydrogen use will therefore at least partly offset the impact of declining auto demand. Platinum seems to be the metal that performs best in this application, which could reverse the current scenario where palladium is in deficit and platinum in surplus (South African producers typically produce a lot more platinum than palladium, so would in general prefer higher platinum prices).

The past year saw PGM companies making super-profits and largely returning this to shareholders by way of dividends and buy-backs. Northam, which we hold in many of our portfolios, essentially bought back 29% of its shares through the accelerated completion of its Zambezi BEE deal (which has been very value-accretive to all stakeholders). Amplats, which we hold indirectly through Anglo American, has paid out dividends of R220 per share (~16% of the company’s current market cap) since August last year.

In our view, the company share prices never gave a lot of credit for the very high palladium and rhodium prices seen earlier this year, but still corrected quite significantly off their recent highs. Given that we foresee a still robust medium-term outlook for PGM metals, we think the near-term price corrections are overdone and pose an interesting opportunity.

While there’s still much uncertainty regarding the longer-term outlook, even after the recent spot price corrections, most of the producers are likely to come close to paying back their current market capitalisations in dividends by mid-decade if current prices hold. We’re therefore of the view that the risk-reward ratio is more skewed to the upside for PGM miners, which is why we recently added to our Northam position across many of our portfolios. 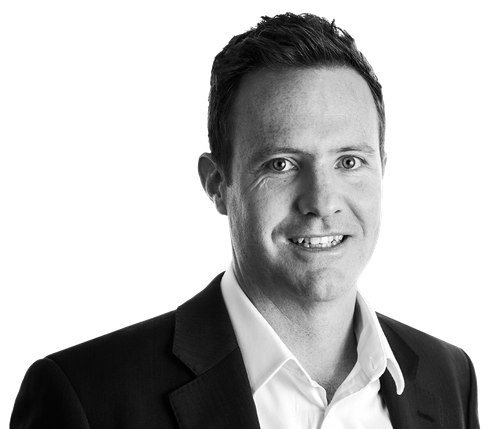