does the structure still add value?

Remgro, the legendary investment holding company controlled by the Rupert family, has been a stalwart in the SPW Equity portfolio for many years. The share has outperformed the JSE All Share Index by about 35% since the unbundling of British American Tobacco (BAT) in October 2008, contributing positively towards the outperformance of the portfolio.

Nearly 80% of the value of Remgro is made up by JSE-listed companies, including Mediclinic (30%), FirstRand and RMB Holdings (RMBH) (23%), RMI Holdings (13%), Distell (6%), RCL Foods (6%) and smaller contributions by Grindrod and eMedia. The major unlisted investments in the Remgro stable include Unilever SA (7%), Air Products (3%) and Community Investment Holdings (CIVH), which owns 51% of Dark Fibre Africa (3% of Remgro’s value).

It’s theoretically possible to replicate 80% of the Remgro portfolio by investing directly in the underlying listed shares. However, by buying Remgro, you’re investing in this basket of shares indirectly at a 17% discount to their current market values. On the other hand, you’re giving up the flexibility to be more selective about the actual shares you’d like to own as well as the relative position sizing (if you buy Remgro, you have to take the basket as is). The Remgro management team also retain a portion of the dividends and reinvest this as they see fit, either creating or destroying value in the process.

We thought it might be an interesting exercise to consider how a buy-and-hold strategy in terms of Remgro’s listed shares would have fared compared to the reported Remgro net asset value (NAV) since March 2009 (first reporting date after the BAT unbundling). If we assume that the unlisted Remgro rump and all subsequent cash flows were reinvested in line with the market, we calculate that the Remgro portfolio would have grown from R47.6 billion in March 2009 to R161.7 billion by December 2016, taking Remgro dividends into account. Remgro’s actual NAV at end-2016 amounted to R152.9 billion – or R8.8 billion below the theoretical buy-and-hold strategy.

About R4 billion of this can be ascribed to the timing of the Mediclinic/Al Noor merger in terms of which Remgro increased its stake in the group, while around R2 billion can be attributed to holding company expenses over the eight-year period. The remaining R2.7 billion is the net effect of other transactions executed by Remgro management, notably the sale of Nampak and unbundling of Implats and Trans Hex, which all added relative value to shareholders. These were offset by further investments in RCL Foods and the acquisition of Grindrod, which in turn detracted from relative performance to date.

The sale of RMI and RMBH shares in 2012 to facilitate the Royal Bafokeng empowerment transaction were also major transactions during the period. Both RMI and RMBH continued to perform strongly after 2012.

We continue to see Remgro as a good long-term investment for private investors’ share portfolios given a diversified set of quality assets as well as an attractive discount to NAV. However, tax implications aside, with 80% of the underlying assets currently available for direct investment in a more flexible way, an active asset manager may question the investment merit of Remgro versus a higher-conviction direct approach on the underlying assets.

For the moment, the relatively high discount to NAV and attractive valuation on some of the key listed assets justifies holding Remgro in the SPW Equity portfolio. Should the discount narrow, however, we may advocate switching a portion of Remgro into some of the underlying assets that we prefer. This, we believe, should enhance prospective returns for our investors.

Comparison of total returns – Remgro and its underlying assets: 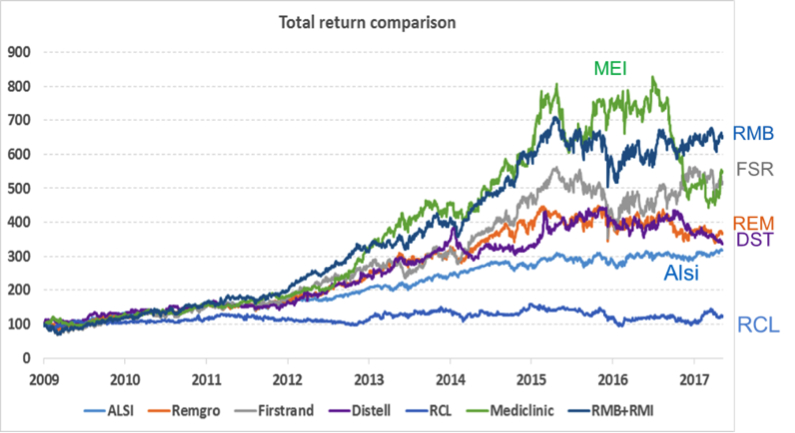