South African banking shares have been on a rollercoaster ride since the 2008 global financial crisis. Despite recovering from this upheaval, our banks have faced trials and tribulations second to none. In the face of these challenges, however, their earnings have been remarkably resilient over time and have created attractive investment opportunities on a number of occasions.

Since the global financial meltdown nine years ago, which had a particularly significant impact on South African banks’ home loan books, they’ve had to deal with a number of trying events: the unsecured credit crisis which led to the collapse of African Bank, a fall in commodity prices, major political turmoil impacting National Treasury, and sovereign credit rating downgrades. In addition, our banks have faced a host of new regulations that have markedly added to the cost of compliance.

Despite these circumstances, different drivers of earnings have dovetailed to produce a fairly smooth profit outcome for banks: 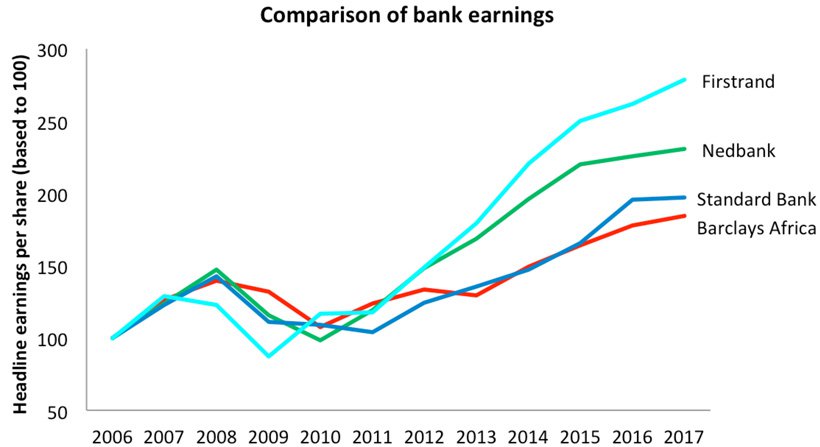 A reduction in bad debts following large write-offs after the financial crisis, as well as a recovery in activity levels, provided the first stage of earnings growth. The concentrated market positions of our banks have also allowed for the effective re-pricing of new loans to compensate for the higher capital requirements enforced on banks in the aftermath of the crisis.

The search for higher-yielding loans and the impact of the National Credit Act, which allowed for the granting of larger and longer-term unsecured loans, fuelled the growth of unsecured loans. The attractive returns and ability to cross-sell added insurance products initially had a positive impact on banks’ growth, but ultimately led to over-indebtedness of consumers and a rise in bad debts. However, this was constrained to a relatively small portion of the big four banks’ total loan books, so the earnings impact was manageable. Meanwhile, banks with operations in the rest of Africa benefited from the strong economic growth of commodity-producing countries during this time.

The South African Reserve Bank started to raise the repo rate from 2014–16 as a weakening rand (driven by lower commodity prices) lifted inflation while economic growth stagnated. The banks cut back on their risk appetite, especially towards retail customers, which resulted in a slowdown in credit growth. Corporate loan growth remained buoyant for a bit longer, driven by commercial property, renewable energy projects and corporate acquisitions.

Bad debt ratios deteriorated in 2016, as consumers came under pressure as a result of poor economic growth, while low commodity prices and the drought stressed the balance sheets of affected industries. However, this time earnings were shielded by the gradual interest rate hikes of the preceding two years, which lifted the net interest margins of the banks.

HOLDING UP IN A TIGHT ECONOMY

So far in 2017, the banks’ profits have arguably held up better than one would have expected given the state of the economy. Clearly the slowdown in credit has brought top-line growth to a halt, but collections on the loan books have performed rather well. This is likely the result of the banks’ cutback in credit in previous years and recovery from the drought and commodity prices, which relieved pressure on mining and agriculture-related clients.

With the positive impact of the higher repo rate already in the bag, bad debt ratios unlikely to improve further and credit growth pedestrian, the earnings outlook for banks over the next year is quite slow. Banks will have a big focus on driving operating costs lower, which should remain a good opportunity to improve profits over the medium term, especially the reduction of branch-related costs as customers increasingly move towards digital banking channels. Thus far the potential cost efficiencies have lagged the impact of lower fees earned on digital transactions versus branch-based banking.

With the quality of the loan books having improved, consumers de-leveraging over the past few years and the banks’ balance sheets strong, they’re well positioned to re-accelerate credit growth as soon as confidence in the economy improves. We’ve already heard noises from Absa that the bank is considering relaxing its credit-granting criteria now that Barclays PLC is no longer the controlling shareholder.

There are growing calls for a revision of the Financial Sector Charter, which may create further uncertainty in the near future. We would, however, expect a much more collaborative approach to any changes in this charter compared to what we’ve seen recently with the Mining Charter.

In the meantime, banks are offering decent dividend yields, with dividends likely to be retained or increased as a result of their healthy balance sheets:

Apart from the main economic drivers as discussed above, there are a few bank-specific factors that we expect to impact the results of individual banks. The main ones are:

Nedbank: Large write-offs and losses at its Nigerian-based associate, Ecobank, have negatively impacted 2016 and 2017 results. An expected recovery in Ecobank’s profitability should positively support Nedbank’s results in 2018. However, the expected unbundling of Nedbank shares by its parent, Old Mutual, towards the end of 2018 may create some overhang on the share price.

Barclays Group Africa: The successful completion of the selldown of its former parent Barclays PLC of its controlling stake in Barclays Africa has likely removed the overhang of this large seller on the share price. Barclays PLC has also compensated Barclays Africa for the expected separation cost. The share is trading at a discount to the other banks, but is lagging in terms of revenue growth.

Firstrand: This is arguably the best managed of the big four banks and earns a superior return on equity, which justifies its higher market rating.

Standard Bank: The bank has been outspending the others on IT infrastructure, which may give it a competitive advantage in future, while earnings should benefit when the high cost of replacing its core banking platform rolls over. Also, management has guided towards break-even this year at the bank’s UK associate – a positive development compared to the material losses suffered in this business over the past few years.