are they worth the risk?

The story of South African government bonds over the past 20-odd years is essentially one of two halves. While bond yields declined materially between 1999 and 2012, this trend was reversed in the aftermath of the global financial crisis (GFC), exacerbated by both the global economic environment and fiscal woes on the home front. Currently, yields on local government bonds appear attractive relative to history – but will investors be compensated for the risk of holding them in a multi-asset portfolio?

The chart below shows the yield on a 10-year South African government bond since 1999, and how this compares to the inflation trend: 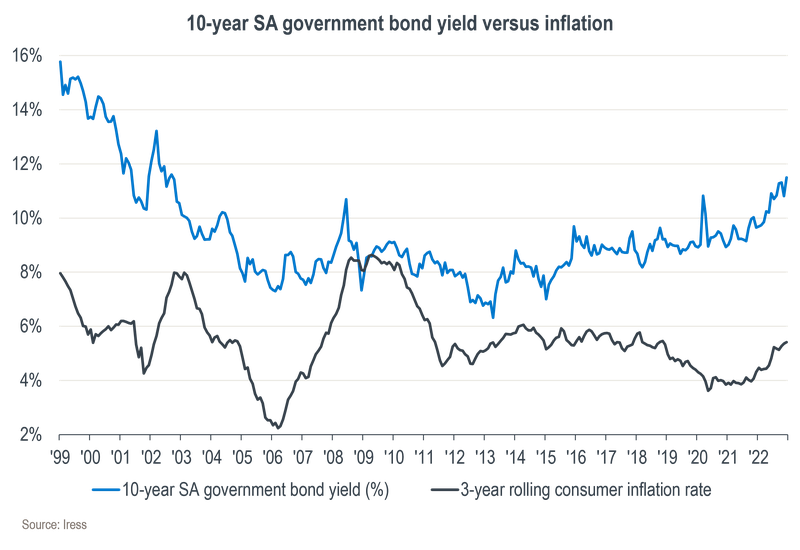 The yield declined materially between 1999 and 2012, when the combination of higher commodity prices and prudent government policies during the Thabo Mbeki and Trevor Manuel era resulted in a structural decline in inflation and a material improvement in government finances. Bond prices move in a direction opposite to their yields, so South African bond investors received an attractive compounded return of 13.5% per annum over the period, well above the 5.6% average inflation rate.

However, the 2008/09 GFC marked a turning point in this state of affairs. While the healthy fiscal position at the time created room to justifiably support the local economy in a countercyclical fashion, a combination of lacklustre global growth, lower commodity prices and economic mismanagement under Jacob Zuma’s presidency resulted in a sharp deterioration in the state’s creditworthiness over the next decade. The economic restrictions imposed during the Covid-19 pandemic compounded the problem.

With tax revenue persistently falling short of budget and government expenses growing ahead of the economy, the government debt-to-GDP ratio ballooned from 22% in 2008 to a projected 70% at the end of the current fiscal year, as indicated on the chart below. This figure excludes another 15% of GDP worth of government guarantees and contingent liabilities through state-owned enterprises – mainly Eskom. 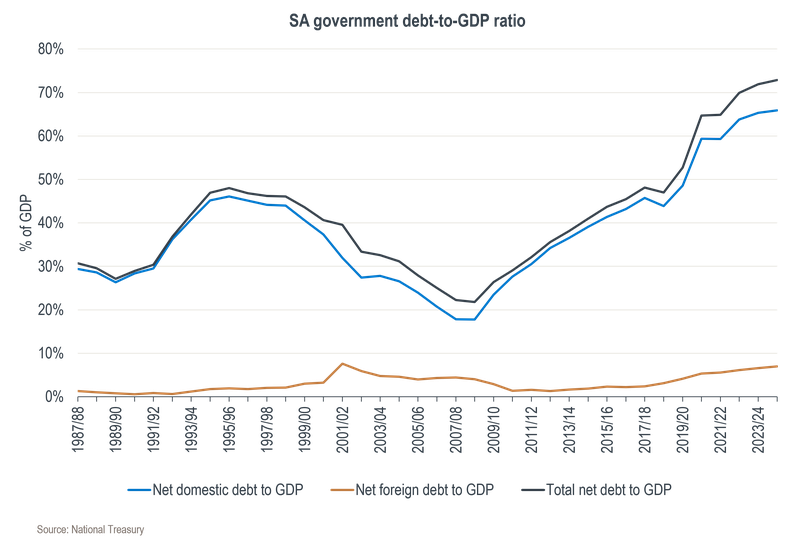 The state’s weaker financial position – confirmed by the multiple downgrades by credit agencies over the past decade – has resulted in bond investors requiring higher yields to compensate for the increased credit risk. More recently, the rising bond yields of developed nations have also put further upside pressure on South Africa’s bond yields in order to maintain their relative risk premium.

South Africa is now in danger of falling into a debt trap, where rising debt servicing costs are consuming an increasing portion of tax revenue, which could ultimately make it impossible to service the debt. The problem is compounded by the fact that South Africa is also running a current account deficit and has a low domestic savings rate, which means that we rely on foreign investment flows to fund the deficits (which again comes at a cost through the future income payments on these investments).

At least National Treasury seems to understand the problem at hand. The recent rise in commodity prices has resulted in a temporary windfall of tax revenue, which it has earmarked mainly for reducing the budget deficit.

Treasury is also pushing back hard against government workers’ wage demands. This is important given the fact that the wage bill has grown much faster than the economy over the past decade, with government workers on average earning 30% more than private sector workers, and South Africa’s government wage bill being in the top 15% of countries globally relative to the size of its economy. It remains, however, a politically challenging task. There is also normally a negative near-term impact on the economy when a government reins in its spending.

Fortunately, South Africa does have deep and well-developed financial markets, while only a small percentage of its debt is denominated in foreign currency. This reduces the likelihood of a sovereign default, as the government could potentially monetise the debt (i.e. it could print money) to repay it. However, this will likely be highly inflationary, eroding the real value for bond holders.

Ultimately, in our view, the only sustainable solution to avoid a so-called fiscal cliff is for the government to implement the necessary structural reforms that will improve the potential economic growth rate of the country. Key to this are the so-called network industries such as electricity and transport that need to become more competitive (and functional).

Given the constrained fiscal space and government capacity, South Africa has no other choice but to leverage private sector involvement and investment to rebuild these industries. Under President Cyril Ramaphosa’s reform agenda, there has been positive (but painfully slow) progress in this regard. There is, however, the obvious risk that it could be derailed by future political developments – a possibility that we must incorporate into our scenario analysis.

While the financial position of our government remains far from comfortable, one could argue that an investor is more than compensated for the risks by the high inflation-adjusted yields on government debt currently on offer. Also, if there is any improvement in the fiscal situation through a combination of better reform-driven economic growth, a sustained commodity bull market and prudent fiscal management, bond holders are likely to generate strong returns on their investments.

For example, if we assume that the 10-year bond moves back to our estimated fair yield of 9% in three years’ time, investors will earn a compounded return of 14.7% per annum over this period. But even if yields stay at the current elevated level, investors can expect a return of over 11%.

And while bond prices have been under pressure over the past year due to international factors, there have been green shoots from a fundamental point of view, including higher-than-budgeted tax revenue and an earlier peak in the debt-to-GDP ratio projected by Treasury. This was confirmed by rating agency S&P revising its credit rating outlook on South African government debt to ‘positive’ in April – a notable deviation from the trend in recent years.

At Sanlam Private Wealth, we assess the appropriate exposure to South African government bonds within a multi-asset portfolio by considering whether the prospective returns appear attractive relative to the perceived risk of the asset class. Whether or not the downside risks materialise depends on future developments that can’t be forecast with certainty. However, in our view, the near-term risk of a default remains low. One can try to manage the uncertainty through exposure to other assets expected to perform well in the event of an adverse outcome for local government bonds, resulting in a more resilient portfolio.

So, rather than taking unnecessary portfolio risk or missing out on the potentially attractive returns by completely avoiding it, we can use the benefits of portfolio diversification to manage the tail risk associated with each investment in the portfolio, including South African government bonds. While the higher yields against the backdrop of marginally improving fundamental factors over the short term justify their holding in our multi-asset portfolios, we will continue to take an active approach and reassess the risks against the fiscal signposts along the way.

We’ve recently expanded our direct bond offering at Sanlam Private Wealth, which will allow clients to capitalise on the attractive yields and allow us to better tailor portfolios for individual income needs. If you’d like more information, please don’t hesitate to contact your portfolio manager.

the end of the tunnel?

after a turbulent year