light at the end of the tunnel?

In a depressed consumer environment, retail shares have underperformed the market since 2013. Most indicators – including consumer credit health and disposable income – seem to suggest the pressure on consumers is likely to continue for at least the next year. Should investors therefore avoid the sector? In our view, declining interest rates and more palatable valuations have resulted in some retail shares starting to look attractive. While we certainly won’t be taking an aggressive stance, we may well add – very selectively – to the sector.

South Africans love to shop – our shopping centre space per person is on par with that of many advanced economies. We have a low savings rate and high pent-up demand, so we spend our cash as soon as it hits the bank. Store sales fluctuate wildly during the month, depending on when salaries and social grants are paid. Our well-developed financial system, including world-class credit bureaus, provides the formally employed with relatively easy access to credit – used mainly for consumption.

Since the turn of the century, we’ve experienced two strong consumer cycles (2003-07 and 2011-12), interrupted by the global financial crisis. Both coincided with declining interest rates, credit expansion and rising commodity prices. Retail shares performed well during these periods. Since 2013, however, the environment has turned sour for South African consumers and retail shares have underperformed the market.

At Sanlam Private Wealth, we’ve been monitoring a number of economic indicators that tend to lead the consumer cycle. These include consumer confidence, disposable income, house prices, consumer credit health and terms of trade (the value of our exports relative to the value of imports). With the sole exception of consumer confidence, which has been in positive (but declining) territory since the election of President Cyril Ramaphosa as ANC president in December 2017, the other indicators all suggest consumers are likely to remain under pressure for at least the next 12 months.

We sorely need economic reforms to boost our country’s long-term growth potential. However, since implementation is likely to be constrained by current political infighting, the benefits of such reforms will be realised only over the long term. The dire state of government finances also places a damper on any fiscal stimulus – which is what supported the consumer recovery after the global financial crisis. In light of this, should investors stay away from investing in the retail sector for the time being? It seems like a rational conclusion, but we’re not quite convinced.

Given the number and scale of the economic and fiscal challenges South Africa is facing, it’s hard to see how another consumer upcycle can re-emerge in the near future. As the economic growth momentum remains negative, we certainly need a positive catalyst to turn the tide. Fortunately, with weak consumer demand driving down inflation and central bankers globally adopting a more accommodative stance, the South African Reserve Bank (SARB) has finally found some room to start cutting interest rates.

Our analysis has shown it takes more than a year for a change in the direction of interest rates to impact actual retail sales. However, the share prices of retailers have historically responded immediately to a change in the interest rate cycle, outperforming the market when rates decline and vice versa. In other words, share prices have reacted well ahead of the actual consumer cycle. Investors have thus been better served following the interest rate cycle when trading retail shares, as the following graph shows: 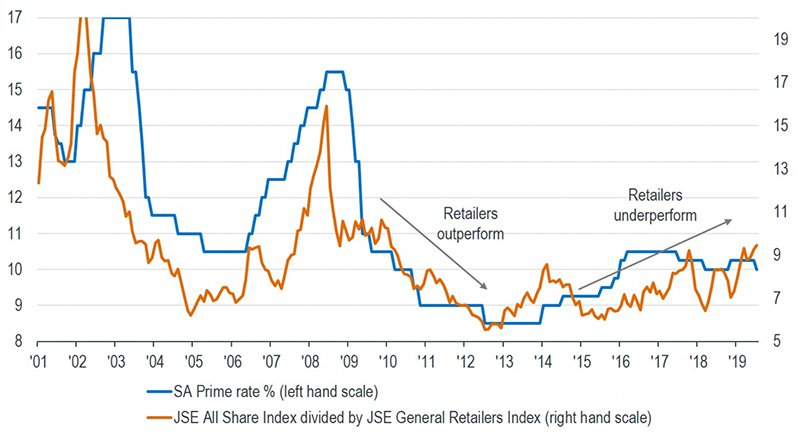 The amplitude of the interest cycle is admittedly likely to be more moderate this time, given the lower starting point for rates and a tighter inflation range. It seems as if the SARB’s Monetary Policy Committee sees the current interest rate as being already accommodative, with limited room for major cuts from this level, especially considering the fiscal risks and the likelihood of a Moody’s rating downgrade. In our view, real interest rates in South Africa are still high at the moment compared to those of our developed market peers.

SARB Governor Lesetja Kganyago has rightly pointed out that monetary policy stimulus alone won’t be enough to reignite the South African economy. However, it will certainly be beneficial given our current circumstances. In addition, although external factors such as commodity prices may work either for or against us, we urgently need improved investor confidence to build on any momentum monetary policy may ignite. For this we must rely on our politicians to deliver the necessary reforms and policy certainty to attract investment.

We believe our banks are well positioned to support growth from a credit perspective. Although there’s been some recent deterioration in the credit performance of certain consumer pockets, driven by weak employment conditions, there don’t appear to be major systemic issues in South Africa’s financial system that could impede future economic growth.

At Sanlam Private Wealth, we’ve held an underweight position in the retail sector in our Houseview Equity portfolio in recent years. While the news flow around South African consumers remains negative, we know that retail shares:

We’re therefore likely to add selectively, and in a very measured fashion, to the retail sector. The fact that we expect a relatively shallow interest rate cycle, and that retail share valuations are less compelling than they were in previous troughs will, however, prevent us from taking a more aggressive stance on these shares.