Stock market darling Naspers has been one of the top performers on the JSE over the past two decades. In 2001, it invested US$32 million in a Chinese internet business, Tencent – an unknown entity to most of its South African shareholders at the time. The Naspers share price has done exceptionally well on the back of Tencent, but it hasn’t quite kept up with the pace of the Chinese company. Why is the global internet and media group currently trading at such a hefty discount to the value of its stake in Tencent – as well as its total assets?

Back in 2001, not many investors would have anticipated that Tencent would grow into one of the 10 largest listed companies in the world, resulting in the value of the Naspers investment in Tencent growing to US$170 billion by March this year, when Naspers for the first time sold 2% of its 33% stake in the Chinese company for a cool US$9.8 billion.

The Naspers and Tencent story is a truly remarkable one. However, despite its investment in Tencent being valued at R4 483 per share, Naspers was at the time of writing trading at R3 026 per share. We estimate that there’s another R318 per share in net cash on the Naspers balance sheet following its recent disposals and acquisitions. Furthermore, there’s R111 worth of other listed investments as well as unlisted investments such as MultiChoice, Avito and the OLX Group, which we value at around R520 per Naspers share.

As the graph below shows, the total assets of Naspers are valued in excess of R5 400 per share. So why is the market only willing to pay R3 026 for Naspers stocks? 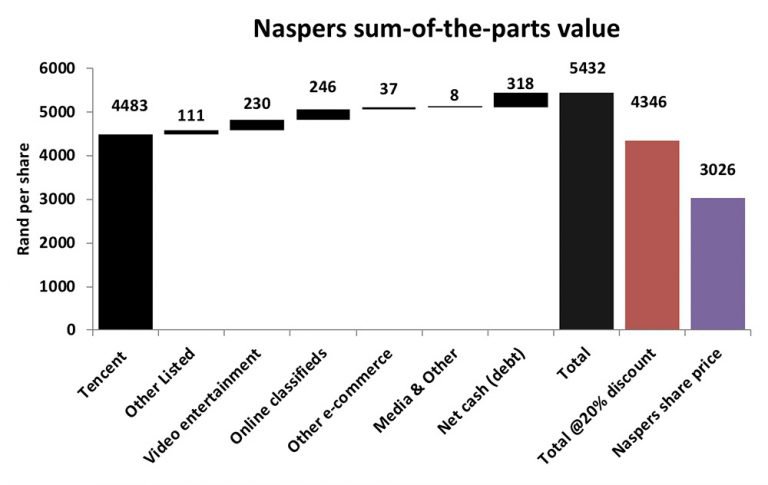 Market commentators have offered a list of possible explanations for the discount. One of the most popular is that the market isn’t willing to pay the full value for Tencent because the Naspers management is destroying shareholder value in the rest of the group, the so-called ‘rump’. We don’t agree with this argument – the probable source of this common misperception is the fact that the rump has been reporting accounting losses over the past number of years.

Investors have become accustomed to judging a company’s performance primarily on the growth of its reported earnings per share. Although this is an important number, it remains an accounting measure and doesn’t always reflect a company’s underlying cash flow or growth in its intrinsic value. There have been many cases of conglomerates financially engineering their earnings per share growth through acquisitions, while silently diluting the quality of the group and not necessarily adding to its intrinsic value.

Naspers as a holding company has by no means participated in this ‘earnings per share game’ of traditional conglomerates. Instead, the focus has been on managing the group’s portfolio of investments like a true investment manager: buying companies where the future investment return prospects are high and exiting businesses where the return prospects are lower relative to the price a willing buyer is prepared to pay.

The nature of the internet industry means that Naspers may buy early-stage companies that are showing great potential but are still going through a loss-making phase. On the other hand, the group may sell businesses that have become profitable but whose future growth prospects are more muted. In this process, Naspers has made a great cash return on investments for shareholders, but by swopping profitable businesses for younger, loss-making ventures, this value creation isn’t reflected in the group’s reported headline earnings.

SPAGHETTI ON THE FLOOR?

Naspers Chairman and former CEO Koos Bekker is still quoted on his ‘spaghetti’ comment of a few years ago on his company’s investment strategy. He said it was like throwing spaghetti onto a wall – some of it might stick and deliver great returns, but some might fail. The loss-making status of the rump seems to serve as evidence for many that most of the ‘spaghetti’ is in fact falling on the floor and that Tencent has perhaps been a one-hit wonder for Naspers.

We do believe there’s a lot less random spaghetti throwing at Naspers these days. The group has endured a period of relatively tight cash flow as a result of the investment requirements of promising businesses in the rump, a low dividend payout ratio from Tencent, and MultiChoice Africa coming under pressure due to the collapse of a few African currencies. This has instilled capital discipline among the Naspers management team. The group has discovered its areas of strength and has been focusing recent investments in these areas, where its investees are most likely to achieve market dominance in ‘winner-takes-all’ types of markets.

In addition to the recent disposal of a small part of its Tencent stake, Naspers has demonstrated high investment returns on the recent disposals of Allegro, Souq and Flipkart. The listed market value of the shares received in Make-My-Trip in exchange for the group’s Indian online travel assets have also translated into a high return on their initial capital invested.

On top of this, we’ve noticed a material decline in impairments of investments in the Naspers portfolio over the past few years. Excluding Tencent, Naspers management has achieved a 23% per annum internal rate of return in US dollars on its capital invested in internet assets to date. This may be lower than the extraordinary performance of Tencent, but has certainly added shareholder value. Furthermore, Naspers holding on to its Tencent shareholding for so long despite suggestions from market commentators for years that the group should dispose of it, was an active decision for which Naspers deserves credit.

So if Naspers management is in fact not destroying shareholder value in the rump (in which case Naspers should theoretically trade at premium to the value of its assets), why does the discount remain?

The sheer size of the Naspers stake in Tencent would make it almost impossible for Naspers to sell its holding in the Chinese company at the listed market price in one go. In our view, this would probably justify a discount of about 20% on the Tencent portion of Naspers assets. Naspers had to accept a discount of 8% to the listed Tencent share price when it recently sold 2% of its 33% stake via a bookbuild. Following this, Naspers agreed not to sell any further Tencent shares over the next three years.

Another structural reason for the discount is the relative size of Naspers on the JSE. Its current weighting is 18% of the FTSE/JSE All Share Index and 22% of the SWIX. From a risk management perspective, most South African asset managers are reluctant to put such a large percentage of their portfolios in a single share. So, while many other local asset managers share our investment case for Naspers, they’re restricted from buying more shares and have chosen to change their benchmarks to the JSE Capped Index, which limits Naspers benchmark weight to 10%.

It’s therefore left up to foreign investors to close the valuation gap on Naspers, and the fact that this global internet and media conglomerate is listed on the southern tip of Africa doesn’t help matters. In this regard, Naspers has intensified engagement with potential foreign investors through a number of investor roadshows.

There’s been a noticeable increase in the number of Naspers shares in issue over the years as a result of share incentives granted to management. Naspers recently said that, given the large share price discount, it would no longer issue new shares for acquisitions or staff incentives. Acquisitions will be for cash, and staff incentive shares will be bought on the open market.

Exchange control regulations unfortunately complicate moving the group’s primary listing from the JSE, but as a result of its current strong cash position and the fact that the online classifieds group OLX has just turned profitable, other opportunities to unlock the discount have emerged. One is the potential listing of OLX in Europe, and now that the cash flow from MultiChoice is no longer needed, it could potentially be unbundled.

Management is rightfully saying it would be unwise to use short-term tactics to force the discount lower if this would destroy long-term shareholder value. Market commentators may disagree, but the Naspers track record speaks for itself. Meanwhile, the pullback in Tencent’s share price since November 2017 (aggravated by the strengthening of the rand) despite the company once again reporting earnings ahead of expectations, means that Tencent’s valuation is suddenly appearing quite palatable again. The discount of Naspers versus the value of its assets is close to an all-time high. This makes us positive on the outlook for Naspers.