THE OUTLOOK FOR OIL –

Since the oil price crash in April 2020, the recovery of the commodity has been nothing short of remarkable. While we expected oil prices to trend towards more sustainable levels – due to both demand recovery as Covid-19 restrictions eased and a lower level of investment by oil firms in general – the speed and magnitude of the recovery has certainly been surprising. Russia’s invasion of Ukraine has also had severe consequences for the industry. What does all this mean for the outlook for oil over the next few years, and how does it impact our investment case for Sasol?

We last wrote about the oil markets just after prices tanked in April 2020. Since then, Brent crude oil prices have risen from ~US$20 to over US$100 per barrel. Over the same period, the Sasol share price recovered from below R60 to around R400 per share and since we added to Sasol around a year ago, it has outperformed the market by more than 50% and recovered to above its pre-Covid-19 levels.

What is the current state of play in global oil markets, and what are the future prospects of the commodity? Most market observers are convinced that over the long term, the world will move away from oil as we adopt electric vehicles and other green alternatives like hydrogen to replace the internal combustion engine (ICE) used by most cars and trucks today. While we agree that the evidence does suggest that oil demand may be lower in 20 to 30 years’ time than it is today, the shift from oil is likely to prove more complex than initially thought.

Oil is mostly used in the transport industry, with ~50% being used for road transport (gasoline and diesel), 5 to 10% for aeroplanes and a further ~5% as shipping fuel. However, other notable usages include ~15% for making petrochemicals (including plastics and detergents) and even tar for roads. The bottom line is that the world is much more dependent on oil than we may want to admit.

If electric vehicles replace the ICE car over time, it means that ~50% of oil demand will disappear, but this too will take time. The total number of cars on the road now is ~1.4 billion, most of them with an ICE. Of the ~90 million new cars sold per year*, less than 10% are electric. On most estimates, the total number of ICE cars on the road is continuing to grow and is likely to peak only towards the end of this decade.

This, along with continued growth in other oil applications – as a result of increasing populations and wealth levels in emerging markets – points to a scenario where we’re likely to experience modest growth in the demand for oil for the rest of the decade. As a case study, consider Norway, the world leader in electric vehicle penetration at ~65% of all new car sales today. Despite the country’s high rate of electric vehicle sales penetration, its oil demand is still the same as it was a decade ago, illustrating the diverse nature of oil usage as well as the importance of cars on the road.

The implication is that the world still needs investment in new oil deposits for at least the next decade. The current reality is quite different though, with capital spend per barrel of oil consumed at multidecade lows and consistent with a world in which demand has already started to decline.

Why would this be so? The primary reason is increasing societal pressure on Western publicly listed oil entities to move away from fossil fuels to investment in green alternatives. At the same time, the OPEC+ alliance is now in a prime position to gradually increase volumes and gain market share as oil continues to recover to (and beyond) pre-Covid-19 levels of roughly 100 million barrels per day.

As a result of all these factors, the oil price has increased to levels last seen in 2014 (see graph below). At one standard deviation above its mean since the early 1970s, this is a high level for oil, and we don’t consider it to be a sustainable incentive price. However, as argued above, if the current rate of investment is not increased, we may well see oil prices remain at higher levels for a prolonged period of time. 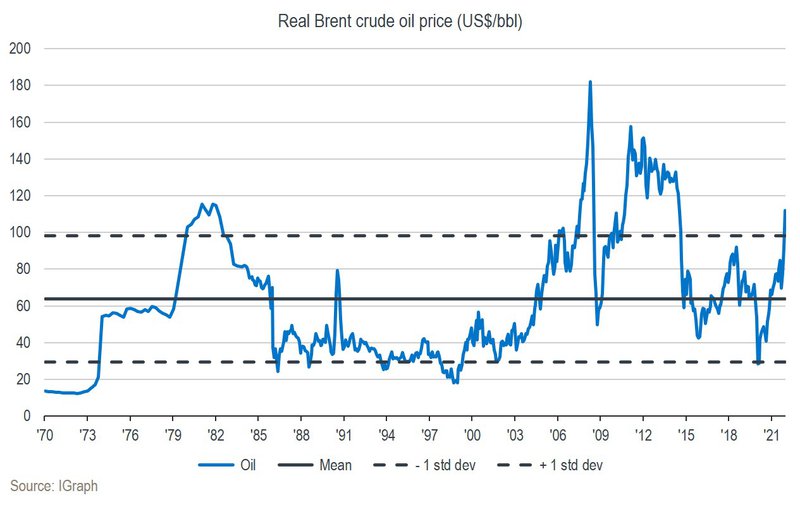 Russia’s invasion of Ukraine has also contributed to the more recent spike in prices to above US$100 per barrel. Russia produces around 10% of global crude oil, so any disruption to oil flows will have severe consequences for the availability of the commodity. The situation remains fluid, but as things stand, Russia’s oil has not been entirely banned by the West (with the European Union very dependent on Russian oil and gas). However, there are reports that the Russians are finding it increasingly difficult to find buyers for their product, with pressure on Western firms not to buy Russian cargoes.

HOW DOES THIS IMPACT SASOL?

The oil price is of course crucial to the prospects of synthetic fuels giant Sasol. While only about a third of this company’s product is fuel, which is directly linked to the oil price, the other two thirds consist of all sorts of chemicals, whose prices are also closely related to oil since the latter is the marginal product used to manufacture these products.

Following its misadventures in the US in building the large Lake Charles chemical complex for ~US$13 billion at about 40% beyond the original budget and several years behind schedule, Sasol’s balance sheet was in a precarious situation when oil prices tumbled in early 2020. Since then, management has done well to restructure the business by cutting costs and selling assets (including ~30% of its new US assets), and with the tailwind of recovering product prices has managed to reduce debt to levels where it is now no longer of too much concern.

In addition, management has set ambitious targets to reduce costs further and run a more efficient business into the future, which is likely to be a positive tailwind for the company over the next few years if it can execute on these targets.

However, as critics have rightly pointed out, over the past few years climate-related risks associated with fossil fuel companies – and especially with Sasol – have increasingly come under the public spotlight. The Secunda plant is among the most pollutive in the world and reducing its carbon footprint will be no small task.

At Sasol’s capital markets day last year, management for the first time shared plans for a possible path away from coal feedstock, initially towards more gas and later to greener alternatives such as biomass, green hydrogen and direct air capture. These suggestions may be feasible to implement using Sasol’s Fischer-Tropsch technology, but execution risks loom large towards the end of this decade.

In our valuation analysis of Sasol, we endeavour to balance both the upside and downside risks. On our base case, we continue to remain constructive on the counter over the medium term – based primarily on the view that product prices may well remain higher for longer than the market is currently factoring in. As always, we will continuously review our positioning relative to our best estimate of fair value.

INFLATION WORRIES:
SHOULD YOU RUSH TO REITS?

FOOD RETAILERS:
WHAT CAN INVESTORS EXPECT?

SHOULD WE ADAPT OUR INVESTMENT STRATEGY?

US TECH STOCKS:
IS IT TIME TO BUY?

WHY WE'RE NOW IN A
'BOB DYLAN' MARKET

but tough road ahead

IS IT TIME TO RECALIBRATE
RETURN EXPECTATIONS?