relevant is the Krugerrand?

It’s survived apartheid, the shifting fortunes of gold, and still features strongly in our collective psyches. But as it turns 50, just how relevant is the Krugerrand?

About 1 500 years ago, a frightened Roman buried a trove of gold coins in what’s now called the Netherlands as barbarian hordes closed in. The coins were found a few months ago, and apart from their historic significance, are literally still worth their weight in gold – testament to the precious metal’s endurance as a store of value.

In modern times coins are still an investment, and the Krugerrand is the granddaddy of them all. This year is the 50th anniversary of what’s now the world’s best-selling investment-grade coin.

An investment in Krugerrands is essentially an investment in gold. And, says Shiraaz Abdullah, Equity Analyst at Sanlam Private Wealth, ‘gold elicits divergent reactions in the marketplace depending on who you speak to’.

‘Some carry a deep disdain for it as a non-yielding asset because it doesn’t have a related cash flow (dividend or interest), while others value the allure of a safe-haven asset,’ he says.

Indeed, not all that is gold glitters.

The problem is that we have no method to value gold as it produces no cash flows and there are no rent or interest payments.

Without those, it’s impossible to produce a fair value estimate for an asset.

‘However, given gold’s 5 000-year history and its track record of outperforming equities in times of panic – which generally occur when equities are at elevated levels – we have some exposure to the yellow metal in our conservative multi-asset class portfolios.’

The Krugerrand was first minted in 1967 to promote South African gold, and was the world’s first coin aimed specifically at investors rather than collectors. It’s named after Paul Kruger, the Boer leader who led the Transvaal republic against the British in 1899.

It’s his dour profile that graces one side of the coin, with a more sprightly dancing springbok on the other.

Gold is now so firmly an international currency that a Krugerrand bought in Johannesburg can easily be exchanged for cash in Dublin or Dubai.

The South African Mint produces the coins on behalf of the country’s Reserve Bank. According to the mint, sales of the Krugerrand run at about 1.1 million ounces a year, or about 25% of the global market for bullion coins. Krugerrands are particularly popular in Europe, especially in Germany, the mint says.

The Krugerrand has not always served the best interest of its makers. During apartheid it became a go-to way to smuggle wealth out of the country, at a time when the white nationalist government restricted the amount of money an individual could move abroad.

In one instance during the late 1980s, customs officials inspecting a Rolls-Royce loaded into a container for shipment to the UK for repairs, found its spare wheel contained a bag of Krugerrands. The coins, along with the car, were confiscated. 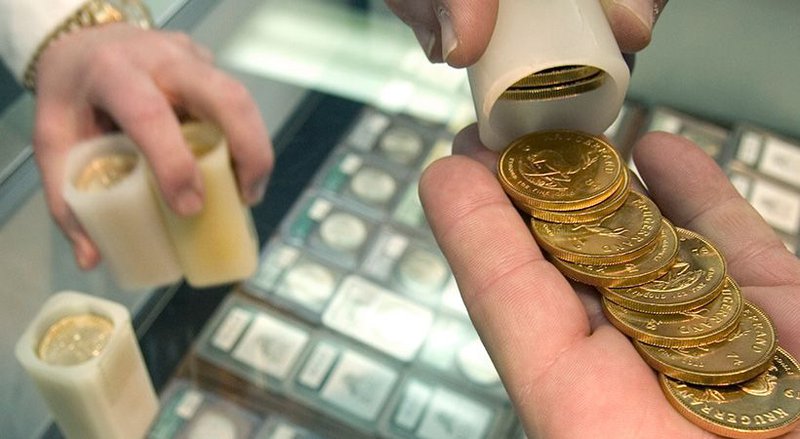 The 1980s were not a particularly happy time for the Krugerrand. It became the focus of worldwide anti-apartheid sentiment, especially as the springbok was at the time the symbol of the country’s national sports teams.

Even US president Ronald Reagan, who was personally wishy-washy on the anti-apartheid movement, figured a ban would be a symbolic slap in the face of the National Party.

So in 1985 he brought the hammer down. ‘The Krugerrand is perceived in the Congress as an important symbol of apartheid,’ Reagan wrote in his missive to Congress. ‘This view is widely shared by the US public. I am directing this prohibition in recognition of these public and congressional sentiments.’

There have been attempts to replicate the Krugerrand’s success – with suggestions for platinum and even silver versions. While commemorative versions of the coin in both these metals have been produced in limited numbers for the 50th anniversary, the Reserve Bank believes there’s too little demand for the concept to take hold. Demand for platinum coins isn’t expected to exceed 50 000 ounces a year – less than 5% of the gold version.

Meanwhile, platinum, while regarded as a precious metal, is primarily used in industrial applications such as catalytic converters. Gold has a few uses in industry, but its main attribute is its rarity.

‘The Krugerrand contains one full troy ounce of gold,’ says Hylton Davies, MD of Cape Town-based dealer SA Bullion. ‘Physical gold does not change over time but currencies do.’

Davies says that since the Bretton Woods Accord was signed in 1944, gold has been priced in US dollars. Following this, global currencies were referenced against the dollar to measure their own value.

In 1971, however, the US abandoned the gold standard and in the nearly half a century since, the dollar has declined in value, as measured by its loss of buying power against gold. Bullion cost around US$31 per ounce in 1971 – and is currently trading at around US$1 266, Davies says.

Technically, the Krugerrand does contain some copper to strengthen it for wear resistance, as gold on its own is exceptionally soft. But the guarantee of each one-ounce coin containing 22 carats of gold is what gives it its underlying value.

Europeans are among the most enthusiastic buyers of coins, but as with many economic trends, it is the Chinese who are shaking things up. The World Gold Council says demand for gold coins and bars in China grew 30% in the first quarter of this year. More than 105 tons of the yellow metal in total made its way to China in the same period.

‘This trend will continue into the future as the US becomes an ever-more indebted nation,’ Davies adds. ‘Two thousand years ago an ounce of gold fed a family for a month. It does so today and will do so into the future.’