should you invest in wine?

If local wines are fetching top prices at auction, does it follow that wine makes a good investment? Sceptics and believers weigh in on the debate.

Henré Hablutzel sits in an air-conditioned office surrounded by cases of Thelema, Hartenberg, Sijnn and Kanonkop – all iconic South African reds. The wine, he says, stretching like a cat in his old leather chair, is just the overflow from his collection at home. He and his wife have downscaled and his cellar is now confined to an air-conditioned bedroom occasionally shared with his grandson.

Hablutzel, an auctioneer with a passion for wine, has been conducting the Cape Winemakers Guild (CWG) Auction for 19 years. He has been collecting wine for longer but doesn’t call himself a wine investor. ‘I drink my wine – always red and always more than 10 years old.’ He says he doesn’t sell it because there’s no market for private (secondary) wine sales in South Africa. This seems an extraordinary statement from a man who at last year’s auction sold a six-bottle case of Kanonkop CWG Paul Sauer 2013 for R13 400 and a case of Rust en Vrede CWG Auction Estate 2013 for R12 600.

‘These are once-off wines produced in small quantities for this event by the best winemakers in the country. You know what you’re buying and how it has been cellared. When you’re buying wine privately you have no idea of its history. Even the best wines badly cellared will not age well.’

However, Wendy Appelbaum, owner of DeMorgenzon wine farm, doesn’t see South African wine as a great investment – yet. ‘We’ve been around since Bordeaux was drained but we’re not valuing our wines correctly. It’s about cellaring and space. When you’re selling wine at R1 500 or R2 000 a bottle, that’s a lot of space for little noise,’ she says.

Whether we change the culture is in our own hands, she adds, but there’s little doubt that within a few years South Africa will regularly be making some of the best wines in the world.

GLOBAL AND LOCAL PRICES ON THE UP 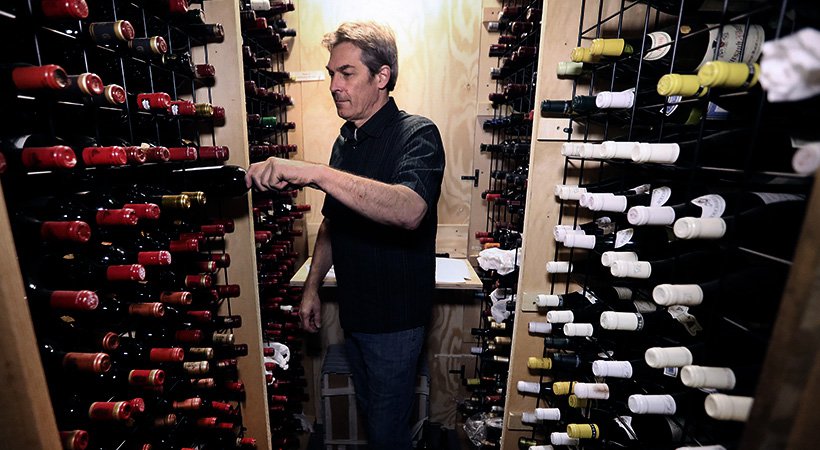 Marc Russell, a Canadian wine collector and founder of The Fine Wine Reserve, stands among some private wooden wine-storage lockers popular in Toronto, due to condo living and the lack of space. (Richard Lautens/Toronto Star via Getty Images)

Globally prices for fine wines have climbed to their highest levels since the crash in wine prices in October 2011 (after the Chinese stopped buying in huge quantities), which saw the Bordeaux Index, launched in 2008 at 100 points, fall from 150 points to 110 points. However, the index has shown some stability since 2014/15.

There’s a fear that equities, which are close to record highs, cannot sustain their climb, so investors in wine funds are viewing wine much like gold – as a store of value in uncertain times.

Roland Peens, founder of The Wine Cellar, which sells local and imported wine and offers investors and collectors a cellaring service, believes South Africa will catch this tailwind.

‘South African wine producers don’t produce in high quantities and older vintages are increasingly rare and expensive,’ he says. ‘Demand for South African fine wine is at an all-time high.’

Last year, DeMorgenzon’s The Divas Chenin Blanc was named as one of the three ‘most exciting wines of the 21st century’ and profiled at Wine Spectator’s New York Wine Experience.

Respected wine critic Michael Fridjhon is also wary of buying local wine as an investment. ‘At the moment South African wine is not a good investment,’ he says. ‘There’s no proper secondary market, resellers can’t claim VAT back, it’s not easy for private buyers – who by definition wouldn’t have a licence – to sell legally.

‘There’s also a belief that our production is getting better every year, so old wine is like an iPhone 4.’

TIPS FOR INVESTING IN FINE WINE

ON SOUTH AFRICAN WINE AS AN INVESTMENT

The biggest difference between these wines and their international counterparts is the massive discrepancy in price. One can buy a top-end South African Bordeaux blend for under €50, whereas a French Bordeaux blend with similar characteristics can easily fetch €100 or more. I believe the gap will narrow as the world recognises the quality of South African fine wines.

ON THE PROPOSED SA WINE INDEX

It would be great to have wine as an investable asset class for investors. Currently the costs of storage and the risk of no secondary market mean it’s difficult to make a case for wine to be part of an investment portfolio.

The index might provide the opportunity of a controlled market for wine investors to exchange trade and this would potentially increase the liquidity from an investment perspective. It’ll also allow investors to invest in certain wines, an opportunity that’s rarely available in the secondary market.