why private is the way to fly

Skip the queues and the delays of commercial travel, and fly anywhere, anytime, in individualised comfort. What’s not to love about private aviation?

Who doesn’t dream of having your own timetable, no baggage restriction, and unlimited legroom? Add in a hectic business schedule where time is very much money, and it’s no wonder private aviation is enjoying a boom.

With time being such a precious asset, a chartered private jet is the ultimate vehicle for travellers who want control over where – and how – they fly.

It’s easy to see the attraction. ‘First and foremost, our clients make use of charter flights because of convenience,’ says Philip du Preez, General Manager: Aviation at ExecuJet in Cape Town. Established at Lanseria International Airport in 1991, ExecuJet is now part of the Luxaviation Group, making it the second largest operator of corporate aircraft in the world.

‘With a charter flight, the client determines the schedule, whereas with airlines, a client needs to fit their schedule around the availability of scheduled flights,’ Philip explains.

In other words, it’s bespoke travel, where you get to call the shots and things run to your personal timetable. No need to check in your bags or wait to pick them up off the carousel. No need to stand in line at the gate or wait for 188 total strangers to find their seat in 32E.

You can show up minutes before your flight leaves, and land at whichever airstrip is closest to where you need – or want – to be.

This is an important consideration for private flyers. If you have multiple meetings in a single day in different cities, you don’t have time to waste in baggage claims. ‘In developing regions, charter plays an especially critical role. Businesses need to be able to send teams directly to remote locations.

‘So, with charter, we offer a point-to-point solution, whereas with an airline, you usually need to fly to a hub, and from there get onto a smaller regional airline to eventually get to your destination by road.’

That’s another attractive proposition for private travellers: as long as an airport meets the required criteria, including runway length, a private jet can land there. This saves valuable time, whether you’re visiting an out-of-the-way location or a major city.

For example, why would you want to land at George Airport when you can fly direct to Plettenberg Bay? Why bother with JFK when you can land at New Jersey’s Teterboro Airport, which is so much closer to Manhattan? And why drive the full 200km from Zürich to St Moritz when you can go directly to Samedan Airport, just 5km from the piste?

‘ExecuJet now also offers bespoke and exclusive destination experiences, such as Antarctica,’ Philip says. ‘From November to January each year, we operate a Gulfstream 550 business jet from our private fixed base operator (FBO) in Cape Town, to Antarctica and back.

‘Packages include a day trip, or a three- or eight-day stay. The flight from Cape Town is just over five and a half hours, and you touch down on a blue ice runway. It’s a true bucket-list experience.’ 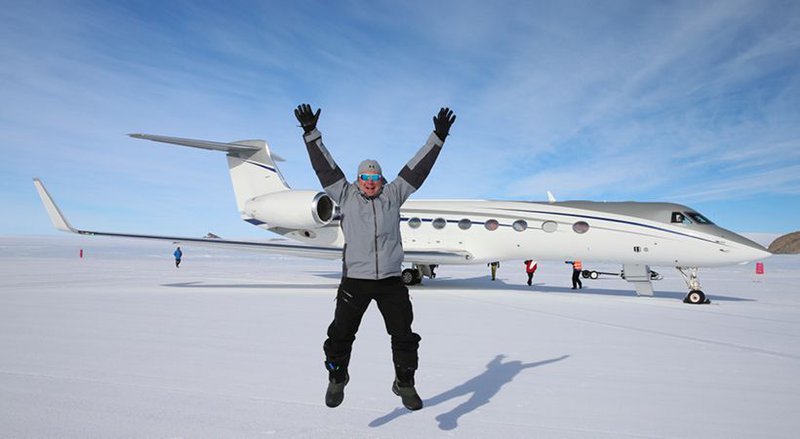 Private aviation allows travellers to go just about wherever they want to, whenever they want to. Here astronaut Terry Virts disembarks his private flight after landing at Wolf’s Fang – the only commercial runway in Antarctica – in December 2017. Image courtesy of ExecuJet.

Aside from the convenience of running to your own schedule, there’s the obvious comfort factor. ‘While generally, the price of a private jet charter will be higher than a scheduled airline service, there’s a good reason for that,’ UK-based private aviation firm Victor notes on its blog.

‘A private jet gives you a level of flexibility, luxury and exclusivity that no commercial flight can provide – so it’s often money well spent.’ No wonder, then, that in 2017 Victor reported that bookings of long-range aircraft, such as the Gulfstream IV and Bombardier Global 6000, were up 98% from the previous year.

Private aviation firm Air Charter Services, meanwhile, promises that ‘Every aspect of your charter is tailored to your requirements and arranged, supervised and monitored by your dedicated account manager’.

That includes private terminal access, security and absolute confidentiality, bespoke luxury catering, on-board multimedia resources on board and – if you like – lie-flat beds.

‘ExecuJet ensures attention to detail throughout the experience with us,’ adds Philip, ‘from specific dietary requirements to preferred reading material on-board, with privacy and discreetness being top of mind at all times’.

In many respects, then, the experience of travelling on a private jet is less like air travel, and more like spending time in a hotel suite or dining in a private room at a Michelin-starred restaurant.

All of which brings us to the obvious question – wouldn’t you want own one? In South Africa, an estimated 160 individuals do. Nigeria, meanwhile, has 90 private jet owners, according to a New World Wealth study.

But while owning your own jet may sound appealing, that same study found 420 South Africans and 310 Nigerians use private jets. This suggests the current rental trend among high net worth individuals extends even to the private aviation sector.

Private jet ownership – or shared ownership, which in some cases makes more business sense – is booming across the world right now.

While the new jet market remains strong, the strengthening global economy is causing a spike in the pre-owned market. A June 2018 Bloomberg report published in the South China Morning Post noted that the world’s wealthier individuals and companies were starting to snap up second-hand private jets, before they became too expensive again.

The private jet market crashed, of course, in 2008 – along with the global economy – as many jet-setters found it uncouth to fly private at a time when personal fortunes were collapsing and companies were cutting back on executive travel costs.

Part of the problem was that too many private planes had been built during the pre-recession boom time, so, as the Bloomberg report puts it, ‘when the crash came, pre-owned aircraft lost value at a dizzying pace’.

As always, though, some of the best deals can be found in other people’s misfortune. Take the example of Steinhoff. Also in mid-2018, and in the wake of its accounting scandal, the embattled South African retailer was forced to put its luxury Gulfstream G550 up for sale, with the reported price tag said to be about $25 million. The deal, of course, was private.