Last month, Africa’s largest pay TV operator, MultiChoice, was unbundled from its parent company, Naspers, and listed as a separate entity on the JSE. Opinions vary on whether going it alone is a blessing or a curse for the pay TV and video entertainment pioneer – and whether investors should throw out or add to these odd-lot shares in their portfolios. In our view, MultiChoice shares currently offer good value, and despite some short-term potential headwinds, there is a long-term investment case to be made for the group.

There are few long-established companies in the world that have been able to keep transforming over the years to the extent global internet and media behemoth Naspers has. From its humble beginnings as a newspaper business in the early 20th century, the group branched out into the sphere of pay TV in 1986. The first pay TV operator to be launched outside the US, MultiChoice in turn planted the seeds for the Naspers Group’s impressive portfolio of consumer internet businesses, including China’s Tencent and the OLX Group.

The Naspers share price has grown exponentially on the back of its successful investments. However, over the past decade, the share has failed to keep up with the growth in the value of its investments, resulting in a large discount to intrinsic net asset value (as we discussed in June last year).

For many years, Naspers relied on the cash flows from MultiChoice to enable the group’s internet ventures to grow in scale. Tencent has been profitable, but it has paid a relatively small dividend to Naspers while the rest of the internet businesses have made a loss in aggregate. Then in 2018 Naspers suddenly found itself with a US$10 billion pile of cash following the sale of 6% of the group’s Tencent shares and the disposal of Indian online retailer Flipkart. At the same time, the group’s next growth engine, online classifieds, was starting to achieve profitability.

For the first time, Naspers was able to live without MultiChoice, and the pay TV operator could now be unbundled to shareholders as part of a wider strategy to unlock the discount in the share price. On 27 February 2019, the MultiChoice Group was listed as a separate entity on the JSE, and Naspers shareholders each received one MultiChoice share for every one Naspers share owned.

Let’s take a closer look at the newly listed broadcaster. Since Naspers launched its pay TV operation 32 years ago, MultiChoice has built its success on quality content that includes a leading local offering, sports broadcasting rights and access to top international studios. It has a fully invested network, which can provide a high-quality and fully encrypted signal to a large number of households in sub-Saharan Africa via satellite dish or digital terrestrial network in key major cities.

In addition, while pay TV penetration across Africa is growing, it remains low compared to international norms. Boosted by a growing and urbanising population, this provides plenty of room for long-term subscriber growth across the continent.

We’ve valued the MultiChoice Group (MCG) at around R200 per share. However, a number of factors lead us to believe that the share may trade well below its intrinsic value in the near future:

The sizable losses in the rest of Africa, as well as accounting for the 25% BEE minority holding in the SA business, fully taxed SA profits and revenue tax in certain African countries, have led to a relatively depressed earnings base for the group. For example, in the 2018 financial year, MultiChoice SA earned R10.5 billion in trading profit, but only R1.3 billion in core earnings was reported at group level (adjusted for the further 5% transfer to BEE shareholders in the SA business).

The material losses that MCG has to absorb for the rest of Africa therefore depresses the group’s reported earnings, which may lead to a lower market valuation relative to what the SA business alone is worth. On the other hand, if the group can successfully turn around profitability in the rest of Africa, it should be able to report strong future earnings growth from the current low base.

Despite the potential short-term overhang on MultiChoice, we do believe there’s a long-term investment case for the group. It has a strong portfolio of video content and sports broadcasting rights. There’s been much focus on the creation of local content, which differentiates it from international competitors. It also has the largest scale in its markets, which helps it to acquire better content as it can spread the cost over a larger subscriber base. Subscriber growth has been strong over recent years, although this was driven by lower-end packages carrying a lower monthly subscription. Pay TV subscription penetration in Africa is still very low compared to international standards, which provides plenty of runway for growth: 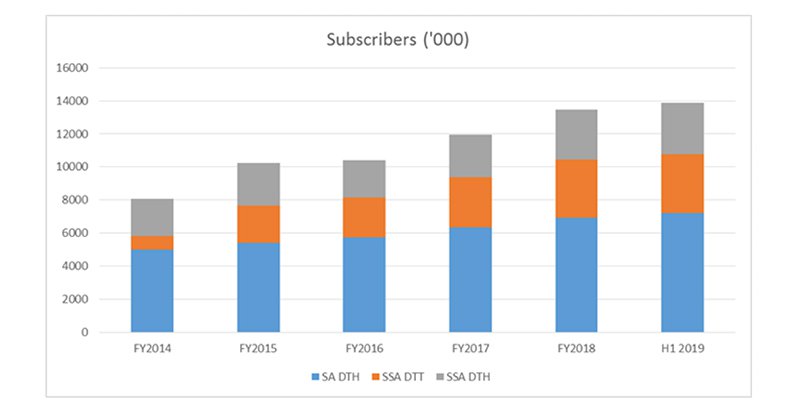 MultiChoice is mainly a fixed-cost business, with the acquisition of content the biggest single cost item. The sharp depreciation of currencies in the countries in which it operates has been the biggest contributor to rising trading losses in its rest-of-African operations. The group has had to acquire a large portion of its content in US dollars and has struggled to pass on cost increases to subscribers in local currencies. The rest-of-Africa strategy is now to primarily focus on mass market subscriber growth in more affordable packages. While quick-win cost savings are being made by optimising content cost, the return to profitability in the rest of Africa will be driven by operating scale over time.

The strong growth in subscriber numbers does bring some short-term earnings headwinds, as MultiChoice provides generous subsidies to consumers for the installation of set-top boxes, costing the group around R3 billion per year (almost 50% of trading profit). The capex requirement on the network has declined over recent years, as the group’s network is now largely set up for its growth requirements. Operating leverage should therefore be quite favourable over the coming years if MultiChoice can keep the subscriber growth up.

Taking a conservative route, if we put a negative value of R15 billion on the non-SA operations, the current share price implies an 8.5 times price-to-earnings (P/E) ratio for the SA operations. This is attractive given the resilience and cash-generative nature of MultiChoice SA. If we value the rest of Africa in line with its medium-term potential at R10.7 billion, the market-implied value for the SA operations is only 4.5 times P/E. The share price may remain under pressure while the shareholder base stabilises, but with MultiChoice trading at around R95 at the timing of writing, we believe it is offering good value.