– Your wealth in a ‘post-trust’ world

We live in a world without trust. Bombarded by stories of lies and deceit every day, ordinary people no longer have faith in the institutions that used to be the bedrocks of our society. In this new ‘post-trust’ environment, investors are understandably concerned about the protection of their wealth. The good news is that despite (or perhaps because of) this ‘implosion’ of trust, the political scenario in our country is shifting fundamentally, with potentially significant consequences for our economy and our society as a whole.

This was the message a panel of leading economic and political thinkers conveyed at a series of client events we held across the country, concluded this week.

Our theme was ‘your wealth in a post-trust world’ – to address the (very reasonable) concerns of shell-shocked investors hammered of late by negative news and seemingly relative ‘truth’. Worldwide, trust is indeed in crisis. This was brought home by the 17th annual trust survey conducted by global communications firm Edelman – the survey, conducted in 28 countries, revealed the largest ever drop in the general population’s trust in the key institutions of business, government and media.

The Edelman study states that when confidence in formerly trusted institutions falls, people’s concerns turn into fears and it is these fears that have been spurring the rise of populism the world over, including in South Africa, in the form of service delivery protests, movements such as #FeesMustFall and the rise of EFF leader Julius Malema.

What I found heartening was that most of the speakers at our client events referred to an unstoppable, fundamental shift that is reshaping our society. Populist actions associated with declining trust are resulting in significant political realignment as ordinary South Africans are voicing their dissatisfaction with perceived economic exclusion, policy inconsistency and other concerns.

Well-known scenario planner and Institute of Race Relations (IRR) CEO Frans Cronje told investors that the reasons for South Africans’ discontent and lack of trust are twofold: low levels of labour market absorption combined with an education system failing our citizens. But these perceptions aren’t contingent on race or class – IRR polls have shown that South Africans of all races believe the best way to build a better future for themselves is through education and job creation. The political impact of South Africans’ unmet expectations is significant – our country’s biggest ‘political party’ is now comprised of citizens who believe there’s no one worth voting for.

Frans made the interesting point that – contrary to what the media would have us believe – how the future of South Africa plays out is not contingent on the end-of-year ANC elective conference and even who wins. It does, however, depend on whether the Cabinet appointed after the 2019 general election can succeed in meeting the expectations of South Africans in the decade thereafter.

He sketched several scenarios that could materialise regardless of the leader chosen in December: the ANC could unite behind either a reformist or a leftist leadership, or a coalition government could form around a reformist agenda, or there could be no political cohesion – in other words, a ‘break-up’ in which South Africans hive off into ‘enclaves’.

He told us that over the short and medium term, a ‘break-up’ scenario may well play out. But even then it won’t be all doom and gloom, since over the long term the increased political turmoil may well see a return to structural reform and it’s not impossible that South Africa could again end up in a 5% growth environment by the mid 2020s.

Former Deputy Finance Minister Mcebisi Jonas agreed that although not yet consolidated institutionally, there was ‘something big’ happening in our society, across party lines. We heard that it’s no longer about the leadership struggle within the ANC, or even who wins. We need to be our own ‘heroes’ – and what happens beyond the December elective conference will be determined largely by the response of South Africans across the board.

He called for all South Africans to unite in broad dialogue about the economic future of our country. The current growth model has clearly reached its sell-by date, and society needs to be mobilised to engage in a radical rethink about a new agenda. It’s not about leadership elections, it’s about whether South Africans can come together and build a broad, national consensus around a new economic trajectory for the country. I agree with him – we certainly can’t leave our economic future in the hands of party barons!

According to the former deputy finance minister, South Africa does have one factor in its favour – a robust ‘immune system’ in the form of strong institutions, as well as entrenched traditions of democratic accountability. We can’t afford to let our guard down, however – as citizens we must collectively protect these institutions and hold our leadership accountable. Through civic education, we also need to increase the level of societal awareness of the role of these institutions and their importance in our democracy.

DAYS OF DEFERENCE OVER

Communications strategist and Classic FM CEO Dominic Ntsele agreed that the days of absolute deference to the ANC were over. The party may have gotten away with certain practices and activities 15 years ago, but not any more – mainly because this will no longer be indulged by the rank and file. He encouraged South Africans to continue to make their voices heard and be active citizens, which will go a long way towards rebuilding trust in our key institutions.

The one thing that will require the utmost vigilance of all South Africans in the run-up to the ANC’s elective conference is the proliferation of fake news and the dissemination of false information. Anton Harber, Caxton Professor of Journalism at the University of the Witwatersrand, told investors that uncertainty over whether news is real is one of the biggest challenges in our post-trust world. And with political parties and factions themselves not beyond deliberate attempts to influence the political climate through the systematic spreading of incorrect information, how do we know what is fact and what is fiction? Anton provided some useful tips on how to spot fake news – read his article here. 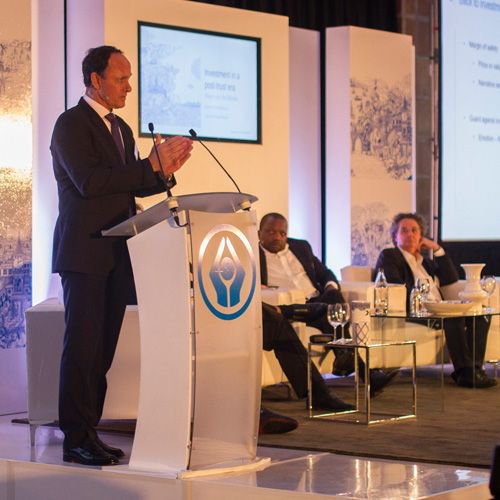 The crucial question is – what are investors to make of our post-trust world, characterised by shaken confidence, scepticism, empty promises by politicians and fake news? Our own Director of Investments, Alwyn van der Merwe, highlighted the approach that we at SPW have always followed in the face of uncertainty. Our investment decisions remain informed by three crucial factors: perspective or macro-economic environment, historical patterns, but above all, prices across asset classes.

The question is how to convert the information at our disposal about a particular asset class into intrinsic value – in other words, how do we determine what we believe an asset is worth based on this information? Alwyn emphasised that we always obtain the information we use, at source. In the case of a share or company, this means the financial statements. Any narrative or ‘story’ told by the company always needs to be verified and backed up by the numbers.

IT’S ALL IN THE NUMBERS

Does our investment philosophy work? Can it be trusted? We believe our long-term investment track record is an indication that it can. Over the past 10 years, our SPW Equity portfolio returned on average just over 12% per year after allowing for fees, compared to the JSE All Share Index’s 10% – a 200 basis points per annum outperformance. The SPW Balanced portfolio saw a 10-year return of 11.3% versus the peer group unit trust industry’s average of 8.1% – a 300 basis points outperformance per annum.

The clear message from our esteemed panel was that we shouldn’t pin our hopes on the result of the ANC’s elective conference in December. The outcome of the hotly contested race – which will no doubt be marred by attempts to discredit the opposition and false information – will of course have a short and even medium-term impact on our economy, the markets and investor sentiment. But as we’ve heard, over the long term, there’s certainly reason for hope, spurred on by the actions of ordinary South Africans who’ve lost trust and are no longer willing to accept the status quo.

A long-term approach has always been a key tenet of our investment philosophy at Sanlam Private Wealth. Despite the false information and scepticism we’re faced with on a daily basis in a post-trust world, this approach to our clients’ investments has borne fruit over the past 10 years, and we will remain committed to our tried and tested investment philosophy and process in protecting and growing our clients’ wealth.