Russian President Vladimir Putin’s invasion of Ukraine and the subsequent sanctions placed on Russia by the West are having a profound impact on global commodity markets. How does this impact our clients’ portfolios, and in particular, our recent investment in Glencore?

Russia is a major producer and exporter of raw materials, ranging from energy products (oil, gas and coal) to metals (including palladium, diamonds and nickel) and crops (Russia and Ukraine together export about a quarter of the world’s global wheat supply).

Russia’s share of global exports of select major metals and energy products, as well as these products’ price movements after the invasion of Ukraine, are indicated on the charts below: 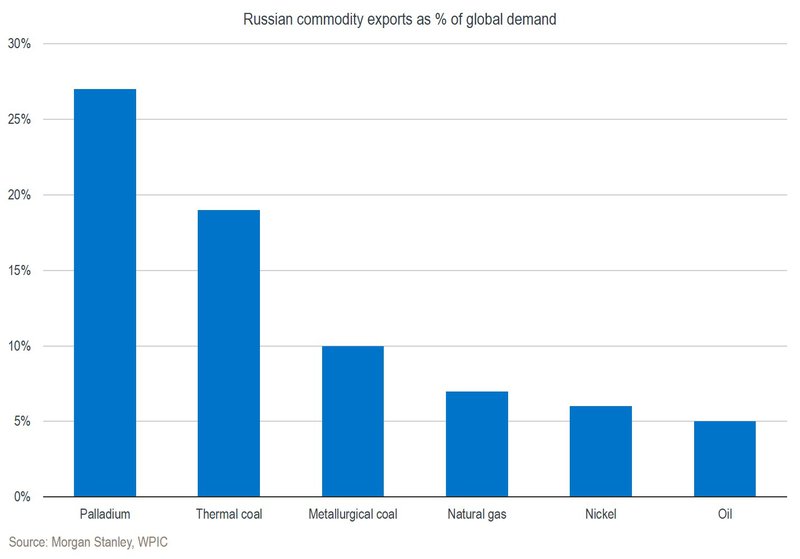 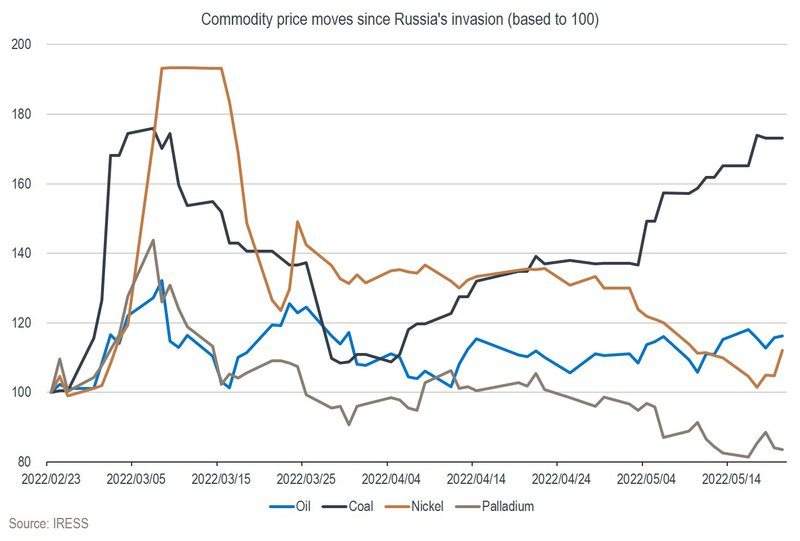 The situation remains quite fluid and it’s difficult to predict when this war will end and how things will play out afterwards. However, we can put forward a few observations. Unless the Putin regime falls, we think it’s quite likely that sanctions on Russian products will remain for some time to come – which is likely to keep the prices of the commodities of which Russia is a major exporter elevated (eventually, supply from other jurisdictions will respond, but this will take time).

The biggest risk to this view is the potentially negative second-round impact of higher inflation on global economic growth. Sharply increasing prices typically lead to central banks raising interest rates to contain inflation, and then to demand destruction due to the decrease in consumer spending power.

In this case, the outcome may also turn out to be different for particular commodities. From a demand side, the negative impact is likely to be tilted towards more discretionary products first (for example, autos and platinum group metals (PGMs)) and then towards more inelastic products such as energy. In addition, commodities exposed to Chinese property (for example, steel and copper) may prove more resilient, with this country widely expected to stimulate its economy over the near term.

In terms of PGM demand, the medium term may well see an accelerated shift towards the use of more platinum at the expense of palladium in gasoline auto catalysts (which benefits South African PGM miners, where platinum is the dominant portion of the metals basket).

From a supply disruption side, the ease with which commodities can be moved plays a significant role. Precious metals transported by plane can more easily be re-routed to other destinations (such as China). However, bulk minerals such as oil, gas, coal and iron ore are much more difficult to move to alternative markets, and some Russian products may well be negatively impacted.

Let’s take thermal coal as an example. In its recent fifth sanctions package on Russia, the European Union announced sanctions on Russian coal from mid-August onwards. Russia exports nearly 20% of the ~1 billion ton per annum seaborne market. About a quarter of Russia’s product is currently exported to Europe, most of it railed over 4 000 kilometres from Siberia. Rail constraints make simply re-routing coal to Eastern ports difficult, which means that some of this product may be left stranded (in the near term at least).

This of course benefits other exporters of thermal coal, one example being Glencore, a company we recently added to many of our clients’ portfolios.

Glencore started out as a commodity trading business in the 1970s and has since grown into a ~US$90 billion mining company, most recently through its merger with Xstrata in 2013. The company’s commodity mix differs from that of its large mining peers (Anglo American and BHP) in a few critical ways:

Glencore’s approach to thermal coal has also been different to that of its peers – the company was an eager buyer of thermal coal assets when other big miners wanted to get rid of their coal exposure. Most recently, Glencore acquired Rio Tinto’s coal assets as well as the Cerrejon mine from partners BHP and Anglo American for very undemanding prices.

Glencore’s response to critics of this strategy has been that it’s better to have coal assets in the hands of someone who would run them down responsibly and reinvest the profits into green metal production (or return this cash to shareholders), as opposed to spinning these assets out into a dedicated coal producer more likely to reinvest profits into more coal mines.

In our view, this is a sensible approach, and it’s indeed turning out to be a profitable one for shareholders, with free cash flow yields in excess of ~25% at the time of writing – mostly from thermal coal. This means that if spot prices stay where they are, you’d make your money back within four years.

However, investing in Glencore doesn’t come without risks. Most notably, the company has been under investigation by several authorities for alleged corrupt dealings in Africa in particular. These investigations are, however, reaching a point where a settlement has all but been agreed on – the issue is therefore likely to be much less material than previously feared by the market.

This doesn’t mean Glencore is now a squeaky-clean operator, but we’ve seen strong action by the company to improve its governance over recent years, and no new issues have arisen for some time. As investors, we need to weigh up both the upside and downside risks, and in our view, the upside from coal and the company’s green metal portfolio more than outweighs the governance risks to the downside.

After being net buyers of miners for the past two years, we’ve recently started to cut back our overall exposure as share prices have rallied to beyond our fair values. However, we do maintain a healthy position with regard to the commodity producers in our clients’ portfolios due to a still-positive market outlook, at least over the near term. We have a deliberate tilt towards energy, where we think the investment case was particularly strong even before the war, on the back of a lack of investment by oil companies in general (see our recent article here).

We’ll continue to act in line with our investment philosophy, by taking profits in the cyclicals as share prices rise beyond our assessment of fair value. Ultimately, high commodity prices lead to either too much new supply coming online or to demand destruction (or both) – which in turn will result in commodity prices returning to more normal levels.