a step in the right direction

JSE behemoth Naspers is heading for Holland – the global internet and media group plans to list its non-South African assets on the Euronext Amsterdam stock exchange. In our view, the transaction makes sense – while it may not be enough to close the discount to the net asset value at which Naspers is currently trading, it’s a step in the right direction. It could also open the door for further transactions to unlock value. Our investment case for the group remains unchanged – we’ll continue to focus on our perceived value of Naspers in relation to its share price.

Last year, we on two occasions shared our views on the hefty discount that the Naspers share price is trading at relative to the fair value of its assets. We argued that, following a large cash injection from the Flipkart and Tencent share sales in 2018, together with the maturing of some of its newer internet assets, the group was finally in a position to start addressing the structural discount effectively.

Over the past few months, we’ve seen a number of developments confirming the Naspers management’s serious intent to unlock this value for shareholders. These include the unbundling of the MultiChoice Group in February 2019, a commitment towards not issuing new shares for staff incentives (instead, buying shares on the open market) and more recently, the announcement that Naspers will be listing all its non-South African assets on the Euronext Amsterdam stock exchange.

Management is of the view that a material contributing factor to the share price discount is its relative size on the JSE. The weight of Naspers in the JSE All Share Index (ALSI) increased from 5% in 2013 to 20% at present (25% in the JSE Shareholder Weighted Index). This has resulted in forced selling by local investment managers due to constraints on the amount of exposure they’re allowed to any single company.

More than half of the group’s shares are foreign owned, which one could argue should be able to make up for the constraints on local investment managers. The management team argues, however, that the group’s listing in South Africa has made the share overly subject to volatile, emerging-market and local sentiment-driven capital flows. The JSE listing is also likely to provide more limited access to investor pools than an equivalent developed market listing.

For these reasons, Naspers plans to transfer all its foreign assets – around 99% of its assets – to a new entity (‘NewCo’, to be renamed in due course) that will have its primary listing on the Euronext. This new entity will own the current Naspers stake in Tencent as well as other online assets such as the OLX Group, PayU, MakeMyTrip, Mail.Ru and Delivery Hero. The idea is to position it as a European-listed global consumer internet holding company and open it up to a much larger potential investor base as well as new passive index flows.

Naspers will retain 75% of the shares of NewCo and distribute the remaining 25% to its current shareholders as a capitalisation issue. Naspers shareholders will therefore effectively be in the same position as before the NewCo listing, but the value of their current Naspers shareholding will be split between roughly 75% Naspers and 25% NewCo shares. NewCo will have a secondary listing on the JSE, which our investors can easily access.

The NewCo listing should reduce the Naspers weight in the major JSE indices by around a quarter, but the reduction in the total effective exposure will be somewhat offset by the inclusion of NewCo in these indices, depending on the proportion of NewCo’s free float script that remains on the South African register.

A Naspers presentation sets out the proposed structure as follows: 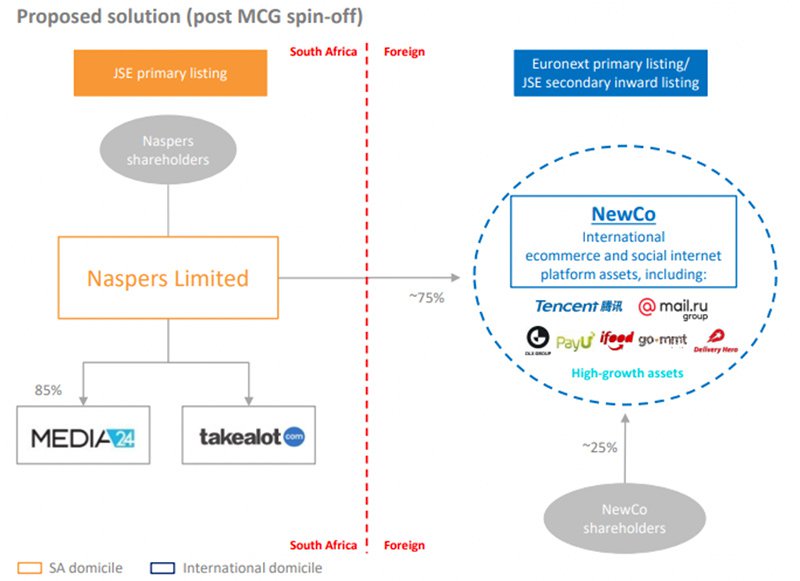 In our view, the transaction makes sense. While we’re not convinced it will be enough to close the majority of the 40% share discount to net asset value, it’s a step in the right direction. The unbundling of Tencent could theoretically have been a quicker short-term fix, but this may not have been very practical given foreign exchange control and other regulatory and tax constraints.

Other comparable companies have managed to impact their holding company discounts through major share buyback programmes. In the case of Naspers, however, the group would likely require a bit more cash firepower and be mindful of potential longer term value destruction if cash resources are directed away from its investment pipeline.

We also believe the Amsterdam listing will open the door for further transactions to unlock value – the European listing of online classifieds business OLX Group is the logical next step, perhaps in the next year or two. This should assist the market to better quantify the value of the Naspers rump, as most of the non-Tencent assets of NewCo – Mail.Ru, MakeMyTrip and Delivery Hero – will then also have listed market values. MultiChoice used to be a large unlisted asset but following its unbundling from Naspers and separate listing on the JSE in February, it no longer forms part of the Naspers portfolio.

The proposed transaction doesn’t alter our investment case for Naspers, as we’ve already factored in the expectation for value-unlocking strategies by the management team. With regard to our investment strategy going forward, we’ll continue to focus on our perceived value of Naspers versus the share price on offer.

Naspers hasn’t yet given an expected date for the NewCo listing, which is still subject to shareholder approval. After the listing, our investors will have the option of gaining exposure to the Naspers internet assets on the JSE through either Naspers or NewCo. The two shares should have very similar economic substance, apart from a relatively small additional exposure to Takealot and Media24 in Naspers. The relative market prices of the two shares will guide our investment decisions going forward.

Subject to certain limits, Naspers shareholders will be able to receive additional Naspers shares instead of NewCo shares. We’re investigating the potential tax consequences for investors under different scenarios, and will communicate these to our clients before the listing takes place.